Salman Khan's latest picture from his Panvel farmhouse where he can be seen covered in mud becomes a butt of jokes. Check it out. 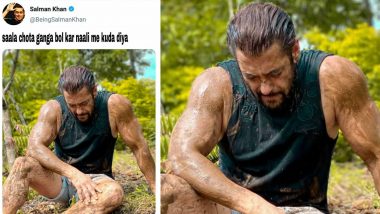 The novel coronavirus has brought the world to a standstill. Although things are coming back to normalcy, the fear in minds of the people still exist. Even our Bollywood celebs are trying their best to be safe. Amid this, it's Salman Khan who has been making the best use of his time at his Panvel farmhouse. For the unaware, the Bhaijaan of B-town has been staying at the farmhouse since the lockdown has been imposed in the country. From cycling to sharing random pics from the farm, seems like Salman is living in a different world altogether. On July 14, he posted a pic of himself all muddy and muscular and well internet was quick to laugh. Salman Khan Goes Sweaty and Mud-Stained in His New Pic From Panvel Farmhouse, Expresses Love and Respect for All Farmers (View Tweet).

In the photo shared, we can see Salman in the middle of a farm covered with mud and flaunting his toned body. While a section of netizens was impressed with the Dabangg star's tribute to the farmers' tweet, on the other hand, there were also many made jokes and memes out of it. Check out some of the fun reactions below. World Environment Day 2020: Salman Khan and Iulia Vantur Sweep and Clean His Panvel Farmhouse While Emphasising on Swachh Bharat Campaign (Watch Video).

Is This True, Salman?

After being human and sanitizer Selmon boi is ready to launch

when you're making cold coffee but didn't close the dhakkan properly https://t.co/xFL7qCv97Q

Must say, meme creators and trolls just need a chance and they are all at it ruining the real essence of the picture. Having said that, some of the memes above are hilarious and how. Meanwhile, on the work front, Salman's next Radhe: Your Most Wanted Bhai was supposed to release on May 22, but due to the pandemic, it has been pushed to a later date. Stay tuned!

(The above story first appeared on LatestLY on Jul 14, 2020 07:19 PM IST. For more news and updates on politics, world, sports, entertainment and lifestyle, log on to our website latestly.com).