Sanjay Khan Birthday Special: Did You Know The Actor Cheated Death On The Sets Of The Sword Of Tipu Sultan?

Sanjay Khan loves the fact that he will always be remembered as Tipu Sultan. But it's on the sets of The Sword Of Tipu Sultan that he was left with 62% burns. 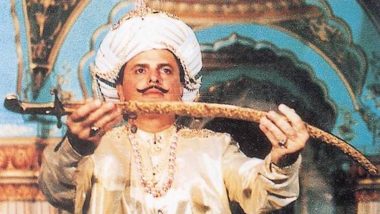 Doordarshan back in the day was extremely educational. We were lucky enough to grow up at that time and learn a lot about India's history. While Bharat Ek Khoj presented a chronological representation of what all happened over the years in India, period pieces like The Great Maratha, The Sword Of Tipu Sultan taught us about the valour and prowess of our kings and warriors. The Sword Of Tipu Sultan was one of the most popular shows on the national channel, which was acted by and directed by Sanjay Khan. It's on the set of this very show that made him more famous than perhaps his movies, the actor suffered 62% burns and was bed-ridden for many months. It all happened on February 8, 1990. Brigadier Mohammad Usman Biopic: Sanjay Khan to Direct Son Zayed Khan for the First Time!

A fire broke on the sets of the show and it apparently claimed 40 lives on the sets. Khan underwent 72 surgeries to stay alive. Recollecting the dreadful incident, he told Hindustan Times in an old interview, "We never imagined that such a disaster could happen. We were horrified. I was outside the studio with my writers when I heard the commotion and went to check [on it]. There was fire everywhere. I shouted, ‘Open the barn doors’. But something hit me on the head. The rest is history.”

The doctor had suggested quitting acting to Sanjay Khan as his recovery was nothing short of a miracle. But he continued production with his younger brother Akbar Khan taking the mantle of the director. Sanjay Khan returned to the sets after his recovery.

(The above story first appeared on LatestLY on Jan 03, 2021 08:10 AM IST. For more news and updates on politics, world, sports, entertainment and lifestyle, log on to our website latestly.com).