Shah Rukh Khan has added one more feather to his hat as he is now crowned as the most in-demand actor worldwide. To know more deets, read the full story! 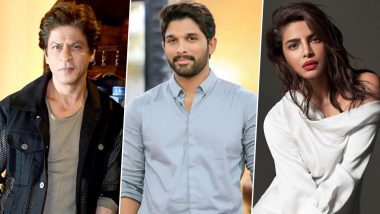 Shah Rukh Khan is the winner honey! As a recent research conducted by Talent Demand (Parrot Analytics), has shown that SRK is the most in-demand actor globally. The result is an outcome of a study that is from July 20 to August 18, 2021. It shows King Khan as the most loved star in the United States and throughout the world. Well, considering Shah Rukh's star power and reach, this was bound to happen. While SRK is on the top, the second position is grabbed by South star Allu Arjun. Shah Rukh Khan Becomes The Highest Paid Actor In India, Charges Rs 100 Crore For Pathan - Reports.

Talking about the top three stars, Shah Rukh, Allu Arjun, and Priyanka Chopra, their fan following is immense. SRK has always been a hot topic of discussion and his upcoming film Pathan is also much talked about. However, the shocking part is to see Salman Khan on the seventh spot. What do you think of the top ten list? Tell us the comment section below.

(The above story first appeared on LatestLY on Aug 25, 2021 03:30 PM IST. For more news and updates on politics, world, sports, entertainment and lifestyle, log on to our website latestly.com).