Shahid Kapoor and Mira Rajput's New Sea-Facing Apartment in Worli To Have THESE Plush Amenities? (Details Inside) 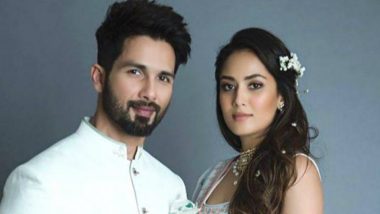 Shahid Kapoor and Mira Rajput have become a family of four now and their need for a bigger home is justified. There is always curiosity around the expensive and huge apartments of the Bollywood stars, so the details of Sasha's new home are already out. If the latest reports are to be believed, the couple is planning to move into a  sea-facing duplex apartment in Worli, Mumbai soon. The plush amenities that have been described will leave you awestruck and demand for the pictures instantly! Shahid Kapoor and Mira Rajput Plan a Birthday Bash for Misha and AbRam, Inaaya Naumi Kemmu are on their Guest List (View Pics).

As reported by Times Now, a source close to the development revealed, "Shahid had been looking to move into a space that would be a better fit for his family of four. And this over 8000 square-feet apartment is expected to be ready for possession by the year-end." Not just this, the apartment will also have a 500 square-feet balcony, swimming pool, spa facilities, gym and separate ballrooms. Now, that's how a typical Bollywood star's house looks like. LFW Winter/Festive 2019: Shahid Kapoor and Mira Rajput Step Out Looking All Sexy and Classy (See Pics).

Shahid Kapoor is still basking in the success of his last filmy outing, which was Kabir Singh. His performance as a 'flawed doctor' and his chemistry with Kiara Advani won over the critics and the audience, making it his first solo 100-crore hit ever. After tasting the sweet success of the movie, it is only natural for him to get back to his family responsibilities towards wife Mira and kids-Misha, Zain. Shahid is yet to announce the next film after Kabir Singh but first, can we see the pics of the new place already?

(The above story first appeared on LatestLY on Aug 29, 2019 07:36 PM IST. For more news and updates on politics, world, sports, entertainment and lifestyle, log on to our website latestly.com).