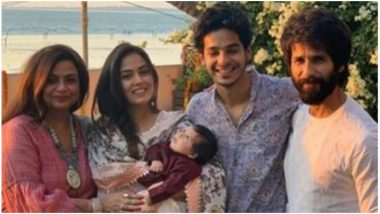 Shahid Kapoor is a doting father and a hands-on husband. The actor who ruled our hearts with his terrific performances in films was also tagged as the sexiest Asian man in 2017. He was strongly criticised for marrying a 21-year-old, Mira Rajput and he thinks it's valid enough. In his recent interaction when host Jitesh Pillai tagged him as a cradle snatcher, he readily agreed and didn't take any offence. Further, when the host asked him if he was ever ready to embrace fatherhood, his reply was affirmative. Shahid Kapoor’s Baby Boy, Zain, Neha Dhupia’s Darling Daughter, Mehr – Meet the Adorable Munchkins Who Made 2018 Extra Special for Us.

Since the actor has seen his little brother, Ishaan Khatter grow all these years, he felt the father in him was ready since a while. Yet when the couple was blessed with Misha, they were paranoid. However, during Zain, the experience was slightly different. When the host asked him if he ever had sleepless nights as a father, Shahid said, "Zain is a very disciplined child. He sleeps on time and wakes up in time. So I never had any sleepless nights with him." Now that's quite adorable on his part. Shahid Kapoor Poses For a Family Picture With Wife Mira and Newborn Zain but where is Misha?

Shahid even went on to elaborate on Mira's struggles during the initial days of their marriage. Since the star wife was new to this industry, she was worried about the constant attention around her and Sasha had to make her understand that it's a part and parcel of their lives. She eventually became used to it and rest as they say is history.

(The above story first appeared on LatestLY on Jan 22, 2019 01:57 PM IST. For more news and updates on politics, world, sports, entertainment and lifestyle, log on to our website latestly.com).