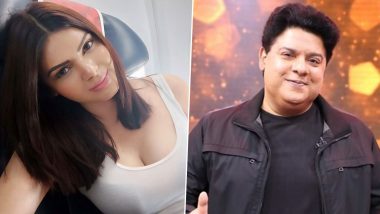 With the #MeToo wave that came in Bollywood a few years back, many big names were dragged into the controversy and were accused of sexual harassment. One of the most shocking revelations were made about director-producer Sajid Khan. Many actresses came out to talk about how he treated his fellow female colleagues and aspiring actress badly and often misconducted with them. Recently, Jiah Khan's sister also accused him of sexual harassment in a documentary. When Sajid Khan Insulted Malaika Arora and Called Her “Vulgar” Before Husband Arbaaz Khan.

Adding to this, actress Sherlyn Chopra has also opened up about a lewd incident that involved the filmmaker. She tweeted about the incident and recalled her meeting with Sajid Khan in 2005 which happened after her father's demise. She revealed that the filmmaker took out his privates in front of her and asked Chopra to feel it. She added that she reminded him that this was not the purpose of their meeting. She added a article that talked about Jiah Khan's horrible encounter with Sajid.

When I had met him in April 2005, a few days after my father’s demise, he had taken his penis out of his pants and had asked me to feel it.

I remember having told him that I know how a penis feels like & that the purpose of my meeting with him was not to feel or rate his penis.. https://t.co/2gnGSdEIrU

It’s not an accusation but the disclosure of a fact.

Our phone records of the past may be checked regarding the same.

After flashing his penis, he had not only asked me to touch it & feel it but also asked me if I had ever seen a penis as well endowed as his.. https://t.co/lmjg7eMZTz

A user even tweeted her asking why she did not speak about it earlier or filed a complaint, to which she replied, "He has the ‘superstars’ of Bollywood to vouch for his ‘character’. It’s my word against theirs. The Bollywood mafia is a strong syndicate." She went on to say that if all that Sajid wants is for females to feel his private parts, he should do it but not in the pretence of giving roles to young and aspiring actresses. Bipasha Basu on Sajid Khan: He Cracked Lewd Jokes Openly and Was Pretty Rude to All Girls.

Sherlyn's allegations come a few days after a snippet from the documentary Death in Bollywood went viral on the internet. Late Bollywood actor Jiah Khan's sister Karishma levelled sexual harassment allegations against filmmaker Sajid Khan and talked about an incident when he asked the actress to take off her top and read her lines during the rehearsal for Housefull. She added how stressed the actress was about this situation.

(The above story first appeared on LatestLY on Jan 19, 2021 04:46 PM IST. For more news and updates on politics, world, sports, entertainment and lifestyle, log on to our website latestly.com).