Siddhanth Chaturvedi made his acting debut with the web-series, Inside Edge that released two years ago. But he shot to fame for his role in his Bollywood debut, Gully Boy. Siddhant’s performance in the film was highly praised by critics and fans. 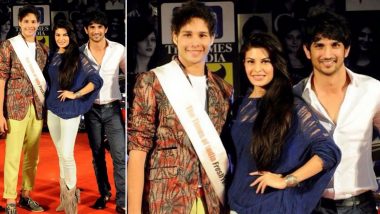 Siddhant Chaturvedi made his acting debut with the web-series, Inside Edge that released two years ago. But he shot to fame for his role in his Bollywood debut, Gully Boy. The film starring Ranveer Singh in the lead was a blockbuster. Siddhant’s performance in the film was highly praised by critics and fans. Well, his performance has helped him land in two other intriguing projects. But right now fans are drooling over the throwback pics that he has shared on Instagram. And the intriguing thing to see is, even Jacqueline Fernandez and Sushant Singh Rajput are posing with him in the pic. Well, when did that happen? Read further to know more. Confirmed! Siddhant Chaturvedi and Debutante Sharvari Wagh to Star in Bunty Aur Babli 2.

The picture that Siddhant Chaturvedi has shared is from 2012, when he won the won Bombay Clean and Clear Fresh Face 2012-2013. Jacqueline Fernandez and Sushant Singh Rajput were the judges of the competition. Isn’t this throwback pic simply cute? While sharing the photo, Siddhant captioned it as, “Lame hair, Same shoes, Fancier pants...#Throwback #FirstJudges #BombayTimes #TimesOfIndia #NationalRound #FreshFace2012 @sushantsinghrajput @jacquelinef143”. We’re all hearts for this throwback photograph! Deepika Padukone to Team Up with Ananya Panday and Siddhant Chaturvedi for Karan Johar's Next Production.

There are more two throwback pictures in which the ‘starry-eyed boi’ Siddhant Chaturvedi is seen posing with the hall of fame star. You must see that as well!

Talking about the upcoming projects, Siddhant Chaturvedi will be seen in Yash Raj Films Bunty Aur Babli 2. He has another untitled film in which he is sharing screen space with Deepika Padukone and Ananya Panday; the film is directed by Shakun Batra. Stay tuned to us for more intriguing updates from the glamorous world of entertainment!

(The above story first appeared on LatestLY on Jan 04, 2020 01:52 PM IST. For more news and updates on politics, world, sports, entertainment and lifestyle, log on to our website latestly.com).