Sushmita Sen's daughter is a terrific actress n the making and here's a magical proof. Read on. 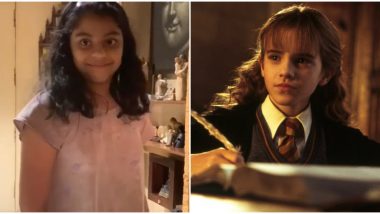 Bollywood diva Sushmita Sen recently had revealed the first look of her upcoming web-series, Aarya. After a hiatus, the actress will finally make a comeback on the OTT platform. Having said that looks like these days apart from being fit and fabulous, Sen is also giving acting lessons to her younger daughter. Why do we say this? As her latest Instagram post sees Alisah turning into Emma Watson aka Hermoine Granger from the Harry Potter series and well it'll make you OMG. The little angel's act as the Hollywood star is so natural and we are loving it and how. Aarya First Look: Sushmita Sen Makes a Ravishing Comeback With Her Web-Series On Disney Plus Hotstar (Watch Video).

For the unversed, Alisah happens to be a Harry Potter fan and in the clip, she is nailing it and how. With the British accent and personality just like Hermoine, Sushmita's daughter seems to be ready for making her acting debut. And just like a proud mother, Sushmita Sen shared the clip with her fans to let them know about the girl's talent. All in all, we feel Alisah is following her mother's footsteps and turning into a marvellous actress day by day. Sushmita Sen Reveals She Battled the Life-Threatening Addison's Disease but Has Recovered With the Help of Meditation Using Nunchaku.

"My forever sunshine on a rainy day!!! Meet our very own Hermoine Granger," a part of her post read. Sushmita Sen will be making her screen return after a long time and the trailer of her web-series is supposedly to release on June 5, 2020. Coming back to Alisah as Hermoine Granger, she is magical and how. Stay tuned!

(The above story first appeared on LatestLY on Jun 04, 2020 09:29 AM IST. For more news and updates on politics, world, sports, entertainment and lifestyle, log on to our website latestly.com).