July begins with some interesting Bollywood releases including R Madhvan's Rocketry: The Nambi Effect which is a multi-lingual biopic based on ISRO scientist Nambi Narayan. 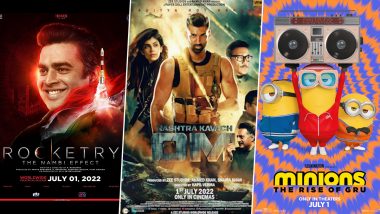 Rocketry The Nambi Effect, Rashtra Kavach, Minions The Rise of Gru Posters (Photo Credits: Twitter)
July begins with some interesting Bollywood releases including R Madhvan's Rocketry: The Nambi Effect which is a multi-lingual biopic based on ISRO scientist Nambi Narayan. The film marks Maddy's directorial debut and all the promos and trailer teaser of the movie has garnered raving reviews so far. Next release is Aditya Roy Kapur's Rashtra Kavach Om which was earlier titled Om - The Battle Within an action thriller featuring the Malan star arriving in the cinema hall near you on July 1. Rashtra Kavach OM Movie: Review, Cast, Plot, Trailer, Release Date – All You Need To Know About Aditya Roy Kapur, Sanjana Sanghi’s Film.
Speaking of Hollywood outings, Steve Carell's Minions: The Rise of Gru, a Despicable Me prequel, is finally arriving in the Indian screens in July 1. Prithviraj Sukumaran's Kaduva which was slated for a June 30 release will now release on July 7. The movie has been postponed by a week due to “unforeseen circumstances”. Other films slated to hit theatres on July 1 are Yaanai, Yemaipothaney, 10th Class Diaries, Pakka Commercial and Ranga Ranga Vaibhavanga. Check out the complete list of the movies releasing in theatres this week. Rocketry Star R Madhavan Claims ‘Panchangam’ Played Crucial Role in ISRO’s Mars Mission, Video Goes Viral – WATCH.
Let's quickly take a complete look at the movies releasing on the theatres this week: (the below releases are subject to change as per the makers' decision)

(The above story first appeared on LatestLY on Jun 28, 2022 08:24 PM IST. For more news and updates on politics, world, sports, entertainment and lifestyle, log on to our website latestly.com).