Watch behind-the-scenes video clips from Met Gala 2019 in which Priyanka Chopra Jonas and Prabal Gurung are crooning to Bollywood songs. 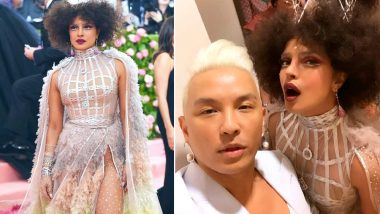 Priyanka Chopra Jonas, Deepika Padukone, Isha Ambani slayed the red carpet of Met Gala 2019. The event took place at Metropolitan Museum of Arts in New York. The pictures and videos from the glamorous affair took the internet by storm. There are numerous behind-the-scenes photographs and videos as well that are doing rounds of the internet and one of them is the one in which Priyanka and ace fashion designer Prabal Gurung are singing to ‘campy’ Bollywood songs. This Is What Lilly Singh Did to Find ‘Sister’ Deepika Padukone at Met Gala 2019 – See Pic.

The theme of this year’s Met Gala was ‘Camp: Notes On Fashion’. Priyanka Chopra Jonas slayed it in the thigh-high slit Dior gown. Her dramatic look was praised and even received flak by netizens. After all the discussions over her eccentric look, social media buffs are now tripping over her ‘campy’ Bollywood songs. There is a video in which Priyanka is seen along with her BFF Isha Ambani and the girls are seen having fun behind-the-scenes. Behind the camera the one who has joined the girls is none other than Prabal Gurung. The video shows Priyanka, Gurung singing to Choli Ke Peeche Kya Hai and Kaate Nahi Kat Te. Met Gala 2019: Priyanka Chopra and Nick Jonas Wish Each Other ‘Happy Third Anniversary’ and Steal a Kiss! Watch Video.

On the work front, Priyanka Chopra Jonas recently completed shooting of her upcoming flick The Sky Is Pink. She’ll be sharing screen space with Farhan Akhtar and Zaira Wasim in the film. The film helmed by Shonali Bose is scheduled to release in October 2019.

(The above story first appeared on LatestLY on May 08, 2019 10:35 AM IST. For more news and updates on politics, world, sports, entertainment and lifestyle, log on to our website latestly.com).