Rishi Kapoor once admitted that he bought his Best Actor trophy for Rs 30,000. Can you guess for which movie? 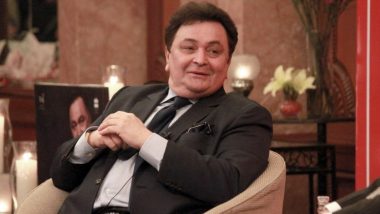 Rishi Kapoor was always honest about his opinions and he seldom refused to keep them to himself. He was often blunt on Twitter but was seldom unapologetic about it. He always believed in being outspoken and his same quality was adored by the ones who knew him really well. In fact, he preferred being honest to an extent that he once admitted buying a film award for Rs 30,000. Yes, there was a time when the Kapoor scion bought an award in the Best Actor category but it was very early in his career. When Rishi Kapoor and Ranbir Kapoor Grooved Together on their Iconic 'Bachna Ae Haseeno' Track at an Awards Ceremony (Watch Video).

In an earlier tweet by journalist Rajdeep Sardesai, he recalled the time when Rishi Kapoor admitted to buying a film award for RS 30,000 in 1973. "I am ashamed of what I did but was young and rich," the actor had said about winning a Filmfare Best Actor trophy for his debut film Bobby. While other actors would hesitate to admit if they had done a similar thing in the past, Rishi had no qualms about admitting that he was at fault. The awards ceremonies are notorious for being biased and the veteran actor was simply acknowledging the fact that we knew beforehand. Rishi Kapoor Once Revealed the Names of Two Actors who Got Him Hooked to Twitter - Guess Who?

Rishi Kapoor had revealed many interesting revelations in his book, Khullam Khulla. The actor's sudden demise on April 30 has startled one and all and the entire industry is still unable to believe this tragic news.

(The above story first appeared on LatestLY on Apr 30, 2020 05:02 PM IST. For more news and updates on politics, world, sports, entertainment and lifestyle, log on to our website latestly.com).