Jacqueline Fernandez and Badshah's new music single is something that wasn't needed. 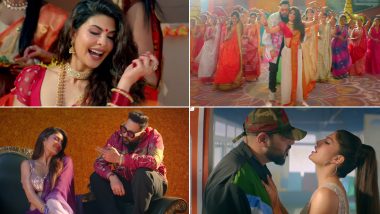 No, it's not a remake of Sonam Kapoor's Genda Phool song from Delhi 6 and we thank God for it. In fact, this is essentially a collaboration between Badshah and singer Payal Dev as he mixes his rap with some Bengali words by her. As the information about this music video correctly describes, the song has a distinct folk melody fused with uber urban sounds but that doesn't really work in the song's favour. Music singles are the new IT- thing in the industry and it's time we stop making them. Jacqueline Fernandez Raises the Temperature by Performing Yoga in Her New Instagram Post (Watch Video).

Genda Phool song stars Jacqueline Fernandez and honestly, she's the only thing about it. The Race 3 actress' sensuous moves and her charming persona lend a helping hand to this Badshah's 'it wasn't needed' track. She, in fact, saves his sinking ship by being a part of it. This is second music single within a gap of 15 days after Mere Angne Mein 2.0 with Asim Riaz. We certainly hope she doesn't restrict herself to these musical outings and plan her comeback on the big screen very soon.

Check Out the Music Video Here

While the composition of Genda Phool is all fine, its lyrics play a spoilsport. Badshah's rap doesn't make sense and it even sounds childish at one point. We have seen him do better and this is certainly not his most promising work to date. Hopefully, the rapper will bounce back to his older days and present us a composition that instantly makes us say 'Dj Wale Babu Iska Gana Chala Do'.

(The above story first appeared on LatestLY on Mar 26, 2020 01:37 PM IST. For more news and updates on politics, world, sports, entertainment and lifestyle, log on to our website latestly.com).