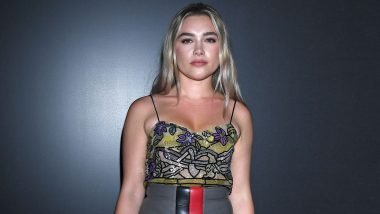 Little Women star Florence Pugh has issued a detailed apology reflecting on her past actions of cultural appropriation, which include braiding hair into "corn rows" and getting henna tattoos. The 24-year-old actor's three-page statement comes in the aftermath of the killing of George Floyd, and her comments noted that the last four weeks have been "huge" in terms of understanding and acknowledging white privilege. Floyd, a 46-year-old African American man was killed by a white police officer in Minneapolis, Minnesota last month. Drake Apologises for Calling Kylie Jenner His ‘Side-Piece’ in an Unreleased Song.

"The world is trying to make change and I'm learning a tidal wave of information that frankly, was always there but I was unaware of. I've tried my best to post, learn, pass what I've learnt on to others and of course, echo the voices of those who don't have a platform to share their wisdom," Pugh began. The Oscar-nominated actor wrote that her past oversight was first brought to her attention by a fan calling her out for a photograph she posted of herself when she was 17. Bryan Adams Apologises for His Racist Post On Instagram, Says He ‘Wanted to Have a Rant About the Horrible Animal Cruelty’

Pugh called the picture an example of "Rastafarian cultural appropriation".

According to Oxford Learner's Dictionary, the term 'cultural appropriation' refers to the ?act of copying or using the customs and traditions of a particular group or culture, by somebody from a more dominant group in society.

"I braided my hair and painted a beanie with the Jamaican flag colours and went to a friend's house, proud of my Rastafarian creation. I then posted about it the next day with a caption that paraphrased the lyrics to Shaggy's song 'Boombastic'," the actor said.

"I am ashamed of so many things in those few sentences," Pugh admitted.

It was "cruel" of her to forget about the photo, pointing out that for eight years she had "no idea how many were offended," she added. She said her white privilege allowed her "to get that far and not know", adding she was initially "proud" of her braided hairstyle. Pugh shared another example from her childhood when she befriended an Indian woman who owned a shop in her native Oxford, England, fitted with fabrics, jewellery, henna and more.

She said the owner was "excited" to share her culture with her and the actor was equally on board to learn. "There wasn't a summer where I didn't henna my hands, feet, my family's hands and feet - I was obsessed." But henna soon became a trend, with major makeup brands profiting off of their own versions of henna sets. No one cared about the origin, a culture was being "abused for profit", she said, adding that she felt embarrassed and sad for somehow being party to it.

"And here's the problem: I actually wasn't being respectful in how I was using it. I wore this culture on my terms only, to parties, at dinner. I too was disrespecting the beauty of the religion that had been taught to me those years ago," she continued. Pugh said she is "truly sorry" to all those who were offended by her in the past and present. "Black, Indian, Native American and Asian cultures and religions are constantly used and abused every new shopping season.

To see change I must be part of the change.

It's not wrong to appreciate the beauty of a culture but rebranding them for the sake of a fashion trend and a dollar most certainly is...

"Stupid doesn't even cut it. I was uneducated. I was unread... I cannot dismiss the actions I bought into years ago, but I believe that we who were blind to such things must acknowledge them and recognize them as our faults, our ignorance and our white privilege and I apologize profusely that it took this long." PTI