The former actress and her husband Prince Harry and his wife officially stepped away from royal duties in 2020 and subsequently moved to California's Montecito in the US. 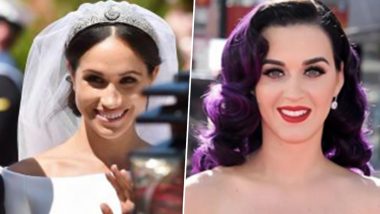 Meghan Markle, Duchess of Sussex, is seemingly still not happy with singer Katy Perry's past comment about her wedding dress. If a new report is to be believed, the Duchess of Sussex still holds "grudge" against the "Roar" hitmaker, reports showbiz.com. Prince Harry Shares the Moment He Realised Meghan Markle Was His ‘Soulmate’.

The former actress and her husband Prince Harry and his wife officially stepped away from royal duties in 2020 and subsequently moved to California's Montecito in the US. Whilst reports have been circulating that the Duke of Sussex has reportedly struck up a friendship with Hollywood star Orlando Bloom, the same cannot be said for their respective wives.

A source told The Daily Star: "Orlando is very sympathetic towards Harry and Meghan and does reach out if he ever sees anything suspicious in the neighborhood." The insider added: "However, Meghan is keenly aware of a comment that Katy Perry made in 2018 about her wedding dress and is notorious for holding a grudge.

"While the comment wasn't meant to be hurtful, Meghan felt under siege at that time," explained the informant. It's also said that Meghan "was overwhelmed by arguments with staff, the Duchess of Cambridge, and Thomas Markle". The source added: "I would not expect to see Meghan and Katy carpooling to PTA meetings anytime in the future!"

Meghan married Prince Harry in 2018 at St. George's Chapel and wore a simple white gown designed by British designer Clare Waight Keller under the Givenchy label for the lavish ceremony. During a promotional tour for 'American Idol', Perry said regarding Meghan's wedding dress that she "would've done one more fitting."

"I would have done one more fitting," Katy told Entertainment Tonight at the time. The 37-year-old Grammy-winning artist added: "I'm never not going to tell the truth! One more fitting, but I love you." A few months after the wedding, Meghan described the process of creating the dream dress.

"I had a very clear vision of what I wanted for the day, and what I wanted the dress to look like," she said. "So what was amazing in working with Clare is that sometimes you'll find designers try to push you in a different direction, but she just completely respected what I wanted to see for the day, and she wanted to bring that to life for me. "In so many ways you are capturing dreams, that as a girl and as you become a woman you will have been thinking about for years," she added.

(The above story first appeared on LatestLY on Aug 15, 2022 08:56 PM IST. For more news and updates on politics, world, sports, entertainment and lifestyle, log on to our website latestly.com).