Onward First Look: Tom Holland and Chris Pratt Team Up Again, Not for Marvel But a Disney-Pixar Film!

Tom Holland and Chris Pratt are all set to come together again, no not for a Marvel film but a fun Disney-Pixar adventure. 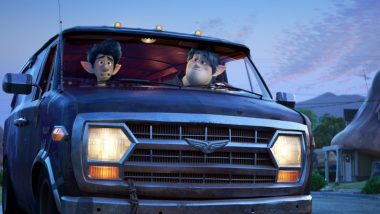 Two of our favourite Marvel actors, Tom Holland Chris Pratt are all set to team up again, this time for an animated adventure. We have previously seen, Pratt who famously played Peter Quill aka Star-Lord in Avengers: Endgame as well as the Guardians of The Galaxy Franchise and Tom Holland as Spider-Man in the popular Marvel films. The duo will now be lending their voice for the upcoming Disney-Pixar film titled Onward. Holland and Pratt will be playing elves in the film. While Pratt will be essaying the role of the older brother, Holland will be seen as a rather reserved younger sibling. Not much has been revealed as of now about the film's plot but the lead cast has been announced by Disney-Pixar.

The film will also star Julia Louis-Dreyfus as their mom. Onward is being written and directed by Dan Scanlon. People have now released the first two images from Pixar's Onward. The pictures show the two elf brothers, as well as their mother. The plot of the film as reported by People revolves around "two teenage elf brothers who embark on an extraordinary quest to discover if there is still a little magic left out there." As per reports, Scanlon wanted the two brothers to be stark opposites and Chris Pratt and Tom Hollan got the right kind of energies for them. Toy Story 4 Trailer: Woody Is Back to Questioning His Life’s Purpose As He Loses His Way Home and Meets Old Flame Bo Peep – Watch Video

Check out the first look of Onward:

Speaking about Tom Holland and Chris Pratt's Avengers connection, Dan Scanlon told People,  “They are clearly friends. They’ve worked together before and hung out together. It was fun to sit back and watch them make each other laugh.” Disney Announces Release Schedule: Avatar 2 Pushed to 2021, New Star Wars Trilogy to Kick Off in 2022.

Onward is slated for a March 6, 2020 release. Before that, Disney-Pixar has the fourth instalment in the Toy Story franchise lined up for a release this year.

(The above story first appeared on LatestLY on May 30, 2019 03:50 PM IST. For more news and updates on politics, world, sports, entertainment and lifestyle, log on to our website latestly.com).