Often referred to as the greatest dramatist of all time, William Shakespeare has contributed his genius to some 39 plays, 154 sonnets, three long narrative poems and a few other verses. While in recent times, his legacy has been carried on in the form of films and so let’s take a look at five of the best Hollywood adaptations of Shakespeare’s work. Read on. 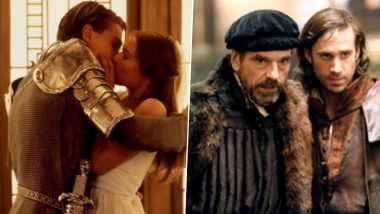 Often referred to as the greatest dramatist of all time, William Shakespeare has contributed his genius to some 39 plays, 154 sonnets, three long narrative poems and a few other verses. His work is so revered amongst the literature community that he is also tagged as the greatest writer in the English language. He produced and wrote some of the most iconic plays of all-time between the time period of 1580 and 1613. His earlier work would primarily focus on comedies, but then in his latter half of the career, he started focusing more on tragedies that included works like Hamlet, Romeo and Juliet and Macbeth. How William Shakespeare and Issac Newton Utilized Their Time Working From Home During Quarantine and Pandemic.

While in recent times, his plays are relevant, and his legacy has also been carried on in the form of films, where various artists have come along and tried to give their own spin on his plays while maintaining the core groundwork that was laid out by the legendary. So let’s take a look at five of the best Hollywood adaptations of Shakespeare’s work. David Fincher Birthday: From Fight Club to Gone Girl - 5 Best Films of the Director That Are Must-Watch!

This 1953 epic directed by Joseph L. Mankiewicz has stood the test of time and is often regarded as one of the best adaptations of this particular story. Starring the likes of Marlon Brando as Mark Antony, James Mason as Brutus and Louis Calhern as Julius Caesar the movie amazingly depicts the story of tragedy and betrayal.

Basically a modernization of Shakespeare’s Romeo and Juliet, director Baz Luhrmann presented us a high octane movie that does Shakespeare with style. Leonardo DiCaprio and Claire Danes play the roles of Romeo Montague and Juliet Capulet respectively and are able to bring the play’s tragedy and sex appeal in a very modernised manner.

This 4-hour epic film is the first unabridged theatrical version of Hamlet. The movie is directed by Kenneth Branagh who also plays the titular role of Prince Hamlet. While the setting of the story is updated to the 19th century the movie still maintains its Elizabethan text and is often referred to as one of the best Shakespeare film adaptations.

This 2015 historical epic directed by Justin Kurzel follows a Scottish general’s rise to power after a trio of witches prophecies that one day he will become the king of Scotland. The film stars Michael Fassbender as Macbeth and Marion Cotillard as Lady Macbeth who give really great performances. The movie is divided into 5 acts and this, in turn, helps the story breath which is accompanied by some really great cinematography that does the original play Justice.

Directed by Michael Radford the film follows the animosity between the characters of Antonio, the merchant of Venice and Shylock. Filled with a star-studded cast, the film is a solid adaptation of Shakespeare’s work as Al Pacino rings in a really great performance as Shylock and truly shines. It’s his performance that carries the film and truly shows how the Jewish community was abused by the Christian population of Venice.

So here are some of the great Hollywood adaptations that come to mind when you think of Shakespeare’s work.

(The above story first appeared on LatestLY on Mar 15, 2021 08:10 PM IST. For more news and updates on politics, world, sports, entertainment and lifestyle, log on to our website latestly.com).