The first leak of Spider-Man No Way Home comes from Twitter, which gives us our first look at Doctor Strange in the film. With the reshoots underway, a sneaky fan grabbed a quick peek at what seems to be a discussion between Spider-Man and Strange. Read on. 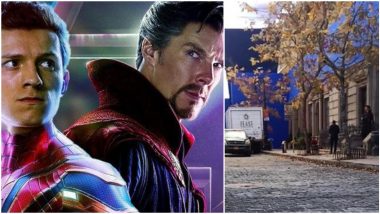 Spider-Man: No Way Home has been shrouded in this huge shrine of rumours. Each day we get closer to the release of the movie, it looks like something or another is unofficially getting leaked. The plot of Spider-Man: No Way Home probably has to be one of the worst-kept secrets in Hollywood. With how many leaks there have been about this movie, one would think that the entire film is out there and nothing more can be revealed, well that was wrong. Today is another day, and we have not one, but two leaks pertaining to Spider-Man: No Way Home. Spider-Man No Way Home: Here's Why Fans Are Expecting Charlie Cox's Daredevil to Appear in Tom Holland's Upcoming MCU Flick?

The first leak comes from Twitter, which gives us our first look at Doctor Strange, played by Benedict Cumberbatch, in the film. With the reshoots underway, a sneaky fan grabbed a quick peek at what seems to be a discussion between Spider-Man and Strange. You can check out the tweet down here below.

Many have been speculating what Doctor Strange’s role will be in the movie, and the most popular theory is that he will help Peter clear his name after the cliffhanger ending of Far From Home. Some early plot leaks have even suggested that Strange is building a prison for villains from all over the multiverse. If this is to be believed, then it would explain his role in the movie and why he might be substantial to the plot because Doctor Strange in the Multiverse of Madness is set to take place right after No Way Home. Spider-Man No Way Home: 5 Interesting Fan Theories Going Viral About Tom Holland's Superhero Film.

The second leak comes from a toy listing. Posted on Reddit by a user, it gives us a description of the plot and gives us a possible confirmation of the multiverse and the sinister six. You can check out the post down here below.

This is the first time that the multiverse has been mentioned in the merchandise rollout of Spider-Man: No Way Home. With keywords like sinister and “individually packaged web slingers” it looks like we might actually be getting Tobey Maguire and Andrew Garfield’s version of Spider-Man. Sinister Six also will be a huge part of the movie, and it would be fun to see this supervillain team finally adapted for the films.

(The above story first appeared on LatestLY on Aug 02, 2021 06:39 PM IST. For more news and updates on politics, world, sports, entertainment and lifestyle, log on to our website latestly.com).