The Devil All the Time: Tom Holland, Sebastian Stan and Robert Pattinson’s Multi-Starrer Psychological Thriller to Hit Netflix on September 16!

Netflix announces the release date of The Devil All The Time on the streaming giant. The psychological thriller is set to premiere on 16th September. Check it out. 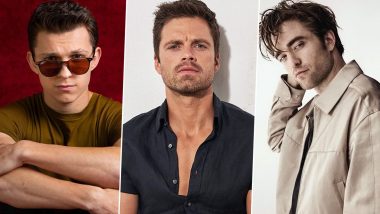 It was just yesterday when Tom Holland treated his fans with a glimpse from the shoot of his upcoming film Uncharted. And well, if that was not enough for all you moviegoers out there, then store loads of popcorn at your home as Netflix just announced the release date of The Devil All The Time on the streaming giant. The psychological thriller is set to premiere on 16th September. However, the cherry on the cake element is the starcast which sees Tom Holland, Sebastian Stan, Bill Skarsgard, Riley Keough, Jason Clarke and Robert Pattinson all in the same frame. Uncharted: Tom Holland Begins Shoot As Nathan Drake For Popular Video Game Adaption, As Confirmed By His #Nate Insta Post!

This multi-starrer film is said to be inspired by Donald Ray Pollock bestselling novel. Holland as Arvin Russell is reportedly to be the star face of the movie whereas Pattinson plays an unholy preacher. Set in the 1960s, the thriller will tell the story of a few pupils from Ohio who are coping up with the mayhem called The Second World War. Indeed, the plot looks interesting and we can't wait for it to release soon. Russo Brothers Reveal How They Convinced Tom Holland to Watch the Original Star Wars Trilogy After the Actor Told Them He'd Skipped It.

Mark your calendars for

in THE DEVIL ALL THE TIME, from director Antonio Campos, coming to Netflix globally 16 September pic.twitter.com/ZQm35ilMyf

So, are you the one excited for The Devil All the Time on Netflix? Ofcourse you will be, as the film also reunites Marvel actors Stan and Holland, and well nothing can be huge than this, right? Tell us in the comment section your thoughts on the same. Stay tuned!

(The above story first appeared on LatestLY on Jul 16, 2020 08:26 PM IST. For more news and updates on politics, world, sports, entertainment and lifestyle, log on to our website latestly.com).