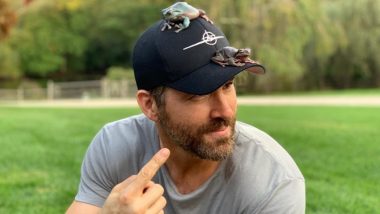 Hollywood star Ryan Reynolds has launched ‘The Group Effort Initiative', a self-financed diversity and inclusion program that will give people of colour an opportunity to work and learn on the actor's productions. The “Deadpool” star took to Twitter to announce the initiative. In a two-minute video, the actor said despite trying to support diversity, the movie industry continues to leave out certain voices. “Making a movie, well it's a group effort. But for entirely too long, that group has systematically excluded Black, Indigenous, people of color and a whole host of other marginalised communities,” Reynolds said. Did Taylor Swift Drop the Name of Ryan Reynolds and Blake Lively’s Third Baby in Her Song ‘Betty’? Twitterati Believe So!

“So here's what we're gonna do. COVID willing, which is a weird thing to say, I'm going to be starting a movie this fall. And I'm committed to bringing between 10 and 20 trainees from the BIPOC community and all other marginalized communities of all ages,” he added. Ryan Reynolds Crashes Hugh Jackman’s OG X-Men Online Reunion As You Would Expect Deadpool To Do! (Watch Video)

The Group Effort Initiative is designed to invest in the talent and creativity of any and all under-represented communities who’ve felt this industry didn’t have room for their dreams. To register yourself, go to: https://t.co/DXMM9VuPhL #GroupEffort #MaximumEffort pic.twitter.com/TJ0FGUMe2l

The new recruits will be paid and housed out of Reynolds' own salary and will spend their days on set, learning from professionals. The Group Effort Initiative posted on its website that the filming and application details will be announced in the coming week.