Uncharted Ending Explained: Decoding the Climax to Tom Holland, Mark Wahlberg’s Adaptation of the PlayStation Game and How it Set’s Up Sequels! (SPOILER ALERT)

The ending is also something that had me giggling and actually got me excited for where the series might go from here. With that being said, here is the ending of Uncharted explained. 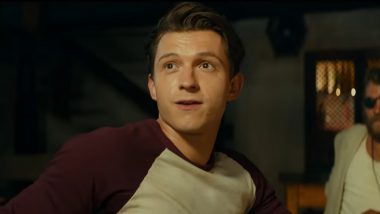 Uncharted has been a long time coming and it’s finally in theatres. Tom Holland plays Nathan Drake in this film adaptation of the iconic PlayStation video game series of the same name. Joined by Mark Wahlberg’s Sully, Uncharted follows him and Nate trying to find the Magellan treasure in a race against time while Santiago Moncada’s forces are behind him. Uncharted Movie Review: Tom Holland, Mark Wahlberg’s Film is a Fun Adaptation of the Popular PlayStation Game! (LatestLY Exclusive).

I really enjoyed my time with Uncharted. It by no means is a revolutionary film, but it provides a great sense of action and thrill that you would expect from the games. Tom Holland is good as Drake and gives a performance that isn't really forced. The ending is also something that had me giggling and actually got me excited for where the series might go from here. With that being said, here is the ending of Uncharted explained. Uncharted Star Tom Holland Opens Up About His Love for India, Says ‘I Am Very Keen to Travel All Over India & Want to See the Taj Mahal’.

As Sully commandeers the helicopters, Nathan stays on the ship and fights off Braddock’s goons. When Braddock commands her goon to ram the other ship into Nate’s ship, Nate finds a ball for the cannon near him and starts trying to light it up. Nate is successful in lighting up the cannon and blows the ship out of the sky.

Nate finally realises that Sully has improved as a person and can trust him as a friend. Uncharted ends with Nate and Sully flying off into the sunset while they spot Chloe in the background in a boat.

The first mid-credits scene involves Sam being alive in a prison contradicting what was told to us before. He is all bearded and can be seen writing a letter to Nathan.

Over here we see Nate making a deal with a gangster in a bar. Nate asks for an envelope in exchange for his ring. He gives it to him, but double crosses Nate and everyone aims their gun at him. Sully then walks into the bar with Nate asking him what’s on his face. Sully has his iconic moustache from the games now and saves Nate with both of them aiming their guns at the gangsters and their goons. The scene ends with them running away and being ambushed by even more guards.

How Does it Set Up a Sequel

Uncharted ends with Nate and Sully finally becoming a team that we know and love from the games. With how Chloe will also be involved in the mix now and the final mid-credit scene hinting at more, we can definitely expect to see this world again.

Sam also being alive adds into the mix. Of course this was bound to happen, we can see something similar to Nate and Sam’s dynamic from Uncharted 4: A Thief’s End in Uncharted 2 as well. It can play into the whole bit of Sam lying to Nate about how he escaped from the jail, all the while fooling Nate about his real intentions.

There are more mainline characters to be explored over here as well. Elena for instance is still yet to appear. We sure get Nate and Chloe in this game, but of course anyone who has played the games knows Nate and Elena are the endgame.

Hopefully if there is a sequel, they explore the treasure of sir Francis Drake.

(The above story first appeared on LatestLY on Feb 18, 2022 04:58 PM IST. For more news and updates on politics, world, sports, entertainment and lifestyle, log on to our website latestly.com).