Uncharted is an action/adventure film starring Tom Holland and Mark Wahlberg. It's based on the PlayStation videogame series of the same name and is playing in theatres right now. 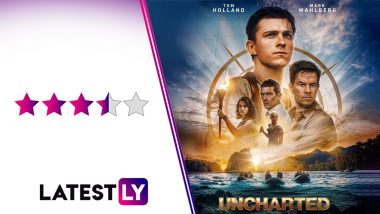 Uncharted Movie Review: Video game films now have had a long curse of being just plain bad. Over the years there have been films like Sonic the Hedgehog and Detective Pikachu that have broken the curse, but overall the majority of them have just been from mediocre to plain bad. So it really makes me happy when I say that Uncharted was actually really fun and good. Sure it does go downhill in some places, but more on that later. Uncharted: Throwback! Before Tom Holland, When Nathan Fillion Turned Nathan Drake for This Viral YouTube Short! (Watch Video).

Uncharted is based on the hit PlayStation video game series of the same name. Following Nathan Drake played by Tom Holland, we see him team up with Victor “Sully” Sullivan to find the Magellan treasure while they are being chased down by Santiago Moncada.

The best way to put Uncharted’s story would be to say that it felt like a loose adaptation of Uncharted 4: A Thief’s End, while moments from different games were amalgamated here. You have Nate and Sully finding a treasure while being chased by a rich man with a private army alongside him. Not only to the story, but there were a bunch of references to Uncharted 4 that really stuck out, and I am actually kind of happy the film wears it’s references on its sleeves.

Uncharted’s story is surprisingly good. It’s not groundbreaking in any way, as a matter of fact it’s your standard run of the mill treasure hunt story. But it does that in a really good way and I was left entertained for most of the run time. That factored in with the fact that there are a ton of game references here, it was just a really damn good time.

One of the references comes in the form of a huge action scene. Anyone who has played Uncharted 3: Drake’s Deception will know what I am talking about. Uncharted features a similar sequence with Nathan hanging out from the tail end of an airplane with nothing to hold onto by loose cargo. That for me was the highlight of the film. The action scenes were spectacular to watch on the big screen, of course not matching the same level as the games, but good in their own right. The final chase sequence involving ships was also a great and creative set piece filled with amazing action and excitement.

But the big question in everyone’s mind is how Tom Holland was as Nathan Drake, and to be honest, pretty good. I was someone who had been questioning his casting since its announcement, but he did prove me wrong. Never was a moment where I felt like I wasn’t watching Nathan Drake. Of course with Holland being a young Drake, he still didn’t have the same mannerisms as game Nate, but he still did feel like the character I loved playing as in the games.

Mark Wahlberg plays Sully. The movie has been in development so long that Wahlberg originally was cast as Nate, but then eventually got recast into Sully. But yeah, his performance is something that I am mixed on. There are times where he actually feels like Sully, but then there are times where he just feels like every other character Mark Wahlberg has played. But overall I still did enjoy him in the role. Sophia Ali also does well as Chloe Frazer, didn’t have much problem there, but the villain, Santiago Moncada played by Antonio Banderas felt the weakest.

He is basically a stand in of Rafe from Uncharted 4 but lacking all the depth of what made that character great. You have Antonio Banderas in your film, and this is the best you could come up with? He gets overshadowed by Tati Gabrielle’s Jo Braddock who feels like a much more threatening force in the movie. Braddock felt like a more physical and actual challenge to Nate. Of course her character isn't groundbreaking or anything, but at least I was a bit intimidated when she was on screen.

The soundtrack was also something that I just didn’t jell well with. Nothing about it screamed Uncharted to me aside from when they played a few cues of the theme from the game. Also there were hip hop songs put in between that just didn’t feel like they needed to be there.

That brings me to my main criticism that there are moments in the film where it felt like a corporate decision was made. This is because characters would have a few traits or maybe quirks that you don’t really associate them with. For example Nate being a scholar in everything alcohol, didn’t really make much sense. That did take me out occasionally from the movie. Uncharted: Did You Know Mark Wahlberg Was to Play Nathan Drake Years Before Tom Holland Came on Board?

Aside from all this, I did very much enjoy my time with Uncharted.

Uncharted actually ends up being a very decent popcorn flick that I very much enjoyed watching. Featuring some really neat action and a good performance by Tom Holland, fans of the games will be satisfied.

(The above story first appeared on LatestLY on Feb 18, 2022 10:37 AM IST. For more news and updates on politics, world, sports, entertainment and lifestyle, log on to our website latestly.com).