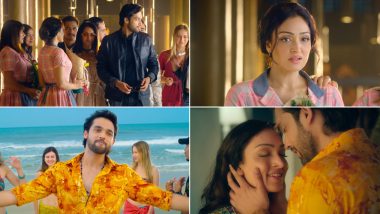 There are numerous classic numbers being remade, some turn out to be hit whilst many others get a thumbs down. It is not that easy to recreate some of the classic Hindi numbers, be it the dance tracks, romantic songs or any other. Parth Samthaan and Khushali Kumar’s romantic song “Pehle Pyaar Ka Pehla Gham” is an official remake of the song from the film Papa Kehte Hai released in 1996. This remake is undoubtedly a visual treat, however, the amount of melodrama happening in this music video has ruined it all. Parth Samthaan Shares a Sizzling Photo With Khushali Kumar Captioning It ‘Yes, It’s Her’, Fans Speculate If the Two Are Dating.

The original number crooned by Kavita Krishnamurthy was picturised on the film’s lead actors Jugal Hansraj and Mayuri Kango. Shot in a picturesque locations of Seychelles, even it highlighted love, pain between the couple who have fallen in love with each other. The original and remake version of “Pehle Pyaar Ka Pehla Gham” has been composed by Rajesh Roshan and it’s a heartwarming one.

“Pehle Pyaar Ka Pehla Gham” remake version shows an electrifying chemistry between Parth Samthaan (Shoor) and Khushali Kumar (Gracy), who know each other since their college days and have fallen in love with each other. The makers have tried really hard to show how the two come across each other after their college days in an unexpected manner. Shoor is shown as a celebrity and Gracy as a housekeeping staff and how the latter is hurt when the former refuses to recognise her in front of his team. But as predicted, the love tale has a happy ending. Pehle Pyaar Ka Pehla Gham Song Teaser: Parth Samthaan and Khushali Kumar’s Romance Looks Fresh and Pure (Watch Video).

“Pehle Pyaar Ka Pehla Gham” is a well-crooned romantic track by Jubin Nautiyal and Tulsi Kumar and beautifully shot as well. But it is the unnecessarily dramatised story that makes us lose interest in this remake version that is directed by Mahon S Vairaag.

(The above story first appeared on LatestLY on Jan 21, 2021 01:49 PM IST. For more news and updates on politics, world, sports, entertainment and lifestyle, log on to our website latestly.com).