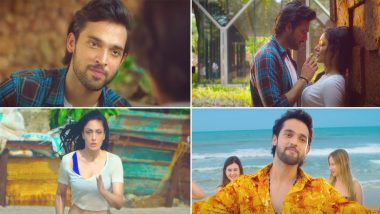 Recently, Kasautii Zindagi Kay's Parth Samthaan had made headlines for sharing an alluring picture with Khushali Kumar on Instagram. Within no time, the photo was all ever the internet where fans felt that Parth is dating Khushali. However, now putting an end to these rumours, the TV actor has teased fans with his song 'Pehle Pyaar Ka Pehla Gham' teaser featuring Khushali Kumar. The said romantic number will release on January 21, 2021. The melody is penned by Rashmi Virag whereas it's sung by the popular Tulsi Kumar and Jubin Nautiyal. Parth Samthaan Shares a Sizzling Photo With Khushali Kumar Captioning It ‘Yes, It’s Her’, Fans Speculate If the Two Are Dating.

This is Parth's first-ever music video and going by the glimpse of it, we are impressed. Right from the locale, soothing music to the lyrics, everything seems to blend in really well. However, the highlight is the chemistry between the leads which looks pure as well as like a breath of fresh air. FYI, this is a remake to the song of the same name from film Papa Kehte Hai (1996). Khyaal Rakhya Kar Poster Out: Himanshi Khurana Looks Totally Smitten By Beau Asim Riaz In Their Second Music Video (View Pic).

There's also a scene in the melody where Parth poses like Shah Rukh Khan on the Goa beach and it's mesmerising. How did you find the song's teaser? Tell us in the comment section below. Workwise, Parth will be next seen Main Hero Bol Raha Hoon which will stream on ALTBalaji. The show will see him as a gangster. Stay tuned!

(The above story first appeared on LatestLY on Jan 20, 2021 03:58 PM IST. For more news and updates on politics, world, sports, entertainment and lifestyle, log on to our website latestly.com).