25 Years of Iruvar: 5 Interesting Facts About Mani Ratnam’s Epic Political Drama Starring Mohanlal and Aishwarya Rai You Should Not Miss!

On the 25th anniversary of the Tamil film Iruvar, here's bringing to light some of the lesser-known facts about Aishwarya Rai and Mohanlal's epic saga that need your attention now. Read the full story. 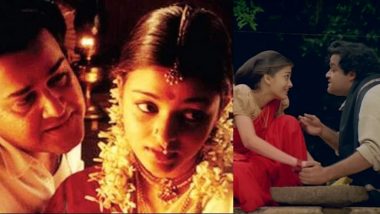 They say old is gold, and Tamil film Iruvar is the right example of the same. Released in the year, 1997, the film was helmed by the iconic filmmaker Mani Ratnam and saw Mohanlal and Aishwarya Rai Bachchan playing the leads. That's not it, as Iruvar's music was composed by the legendary AR Rahman. Today (January 14), marks 25 years of the movie and so Twitterati can't keep calm. #25YearsOfIruvar happens to be a top trend on the micro-blogging site. Ponniyin Selvan Part 1 First Look Out! The Mani Ratnam Film To Release In 2022 (View Pic).

Having said that, in a way to celebrate the flick's glory, we bring to you five lesser-known facts about the political drama that are interesting.

Iruvar created a mark in the minds of many and so after it was released in the United States, Time magazine was impressed with Mohanlal's performance and had quoted "Mohanlal: India's answer to Marlon Brando". Indeed, both the stars are free-flowing when it comes to acting.

It was Aishwarya Rai who made a dream acting debut down South with a dual role in 1997, with Iruvar. She was lauded for her performance as Pushpavalli and Kalpana. Surprisingly, her Bollywood debut was also in the same year with the romantic comedy Aur Pyaar Ho Gaya opposite Bobby Deol.

And That's How Iruvar Got Its Tamizhselvan

For the role of Tamizhselvan, it was Nana Patekar who was first approached but he rejected it due to remuneration issues, and so later it was offered to Kamal Haasan, Sathyaraj Mammootty, among many others. However, it was Prakash Raj who ultimately became Tamizhselvan. The character was based on the former CM of TN, M Karunanidhi.

In an old interview, while talking with Priyadarshan and praising Mohanlal's performance, Iruvar's director Mani Ratnam had said that he will not work with Mohanlal again, because, he's mesmerized by his performance and always used to miss saying 'cut' when the scene finished.

It was Prakash Raj, who had won a National Award for Iruvar. His stellar act as Tamizhselvan impressed the critics. The actor had taken the trophy home in the Best Supporting Actor category. Bro Daddy Trailer: Mohanlal, Prithviraj Sukumaran Make a Fun Father-Son Duo in This Family Entertainer (Watch Video).

So, how did you'll like the trivia about Iruvar above? Meanwhile, for the unaware, the film is inspired by the lives of MG Ramachandran, M Karunanidhi, and Jayalalithaa set against the backdrop of cinema and politics in Tamil Nadu. Stay tuned!

(The above story first appeared on LatestLY on Jan 14, 2022 05:47 PM IST. For more news and updates on politics, world, sports, entertainment and lifestyle, log on to our website latestly.com).