Another Pic Out! Ex-Lovers Hansika Motwani And Simbu Shoot For Maha On A Yacht

Here's another picture of Simbu and Hansika from the sets of their upcoming film, Maha 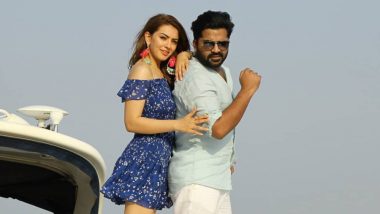 Hansika and Simbu on the sets of Maha

Who said exes can't be friends and work together? Bollywood actors and former lovers Ranbir Kapoor and Deepika Padukone burst this myth when they came together for Ayan Mukerji's Yeh Jawaani Hai Deewani. The film was a smashing hit as it went on to make huge money at the box office. It didn't end there as the duo re-united for Imtiaz Ali's Tamasha and impressed the audience yet again with their chemistry.

Now another pair of former lovers have come together for a film. We are talking about Hansika Motwani and Silambarasan aka Simbu. The two were in a serious relationship for quite sometime before calling it quits in 2014. Their fans were devastated, but the good news is that they have let all the awkwardness behind and are set to feature together in a film titled Maha. The first picture from the sets is out and we just can't wait for some more. Hansika Motwani to Share Screen Space With Rangasthalam Actor Aadhi Pinisetty in Manoj Damodharan’s Next.

Check out the picture of Hansika and Simbu from the sets of Maha right here:

In the photograph that has been shared by Simbu's fan club, we see Hansika and Simbu posing on a yacht. Hansika is seen wearing an off-shoulder blue printed dress, Simbu is sort of colour coordinating with her in a light shade of blue shirt and white pants.

For those of you who don't know, while Hansika will be the lead actress in the film, Simbu will have only a special appearance in the movie, which is being directed by debutant director U.R. Jameel. It was him who was keen to have Simbu do a cameo in his film. Word has it that soon after hearing the script, the actor readily agreed to do a cameo in the film. A few days back a video from the same location made its way to social media. Check it out right here:

It was in March that Hansika announced the news of her comeback with Simbu on Twitter. Here's her tweet:

Since the buzz is crazy and the news is leaked out way before time. Me and #STR are back in #MAHA 😊 pic.twitter.com/98WWdOg3Bu

We can't wait to see them together on the screen yet again? Mutual thoughts?

(The above story first appeared on LatestLY on May 29, 2019 03:43 AM IST. For more news and updates on politics, world, sports, entertainment and lifestyle, log on to our website latestly.com).