Vanitha Vijayakumar is the eldest daughter of Tamil actors Vijayakumar and his second wife Manjula. Vanitha is known for her works in South Cinema. 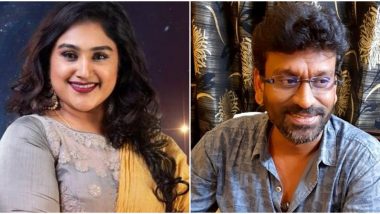 Vanitha Vijayakumar is the eldest daughter of Tamil actors Vijayakumar and his second wife Manjula. Vanitha is known for her works in South Cinema. She has acted in Tamil, Malayalam and Telugu films. She has also appeared in many television shows and it also included the controversial reality TV show, Bigg Boss Tamil 3. As per latest reports, this BB Tamil season three fame Vijaya would be tying the knot on June 27 in Chennai. Bigg Boss Tamil 3 Shocker! Vanitha Vijayakumar Gets Eliminated From Kamal Haasan’s Show.

As per a report in India Glitz, Vanitha Vijayakumar has confirmed that she would be tying the knot with visual effects director Peter Paul. It is said to be an intimate affair that would take place at the actress' residence. Vanitha has also revealed to the portal that she would soon be releasing a press release on the same. This would be third marriage for Vanitha. She was first married to TV actor Akash (in September 2000) with whom she has two children, Vijay Sri Hari and Jovika. After divorcing Akash in 2006, the actress married businessman Anand Jay Rajan in 2007 with whom she has a daughter named Jaynitha. The couple was divorced in 2012. Then for a brief period she had also dated choreographer Robert.

In a statement, Vanitha Vijayakumar had expressed about her relationship with fiancé Peter Paul. She said, “He walked out of my dream into my life. He filled the void I never knew existed. Surprisingly i felt secure and complete around him. He stepped in as a friend and helped me when I was lost without any technical help and support for my YouTube channel during the lockdown. He made things happen in such a way that I was at ease ,so calm, stress free and felt taken care of. You all know my children have been my priority always . When he asked for my hand in marriage I was speechless. (Deep inside I was screaming yes though).” Is Robert Bigg Boss Tamil 3 Contestant Vanitha Vijayakumar’s Third Husband? Choreographer Clears the Air.

The Statement From Vanitha Vijayakumar

#VanithaVijayakumar is getting married to a filmmaker #PeterPaul on June 27th at a simple function pic.twitter.com/V1WmOXP1VI

Vanitha Vijayakumar further stated, “I told him my children need to approve. And when he spoke to them they screamed yes. Tears welled my eyes when my daughter's said this was the best thing that has happen to me and they want him in their lives as well. Being a single mother was not what I asked for or achieved. It has been a long lonely painful struggle all through. Especially when there is no help or support from my "so called family". We wish Vanitha Vijayakumar a great life ahead!

(The above story first appeared on LatestLY on Jun 18, 2020 10:02 AM IST. For more news and updates on politics, world, sports, entertainment and lifestyle, log on to our website latestly.com).