The teaser begins with the introduction of Vikram's character who is a mathematical genius. He is a teacher who coaches underprivileged kids and is loved by all. 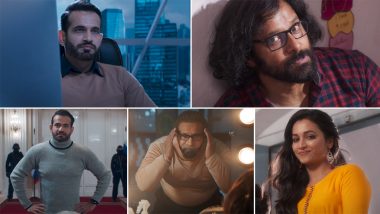 Chiyaan Vikram had an intriguing surprise planned for his fans today as he treated them with a glimpse of his upcoming film Cobra. The makers fo the film unveiled an engaging teaser of the film where we get to see Vikram essay the role of a super-genius mathematician but with a treacherous twist. The teaser is gripping and Vikram's fans will see him in yet another new avatar. Vikram is an evil man disguised as a nice teacher and this makes for a good story that his fans cannot wait to see on the big screen. Cobra: On AR Rahman’s Birthday, Makers Of Chiyaan Vikram Starrer Announce The Film’s Teaser Launch Date.

The teaser begins with the introduction of Vikram's character who is a mathematical genius. He is a teacher who coaches underprivileged kids and is loved by all. He is credited as an amazing teacher by everyone and is rewarded for his contribution towards the kids' education. But there is so much more to this mathematician that meets the eye. His character is also one of the most-wanted international outlaws who commits crimes using maths formulas.

Vikram’s character is seen travelling from one country to another and has the talent of getting into any disguise with ease.  Reports suggest Vikram will be seen in more than 20 looks in Cobra which makes it difficult for Irfan Pathan and team to catch hold of him. Irfan sets on a mission to teach him a lesson and get him caught and the fans are left to wonder if he will be able to do it to not after seeing the teaser. Chiyaan Vikram 58 Is Titled Cobra; Ajay Gnanamuthu Directorial to Release on Summer 2020.

Produced under the banner of Seven Screen Studios, the music and original score for Cobra has been composed by AR Rahman. This is the fourth time he is teaming up with Chiyaan Vikram after Pudhiya Mannargal, Raavanan and I. Cobra marks the Kollywood debut of the film’s leading lady Srinidhi Shetty and the acting debut of cricketer Irfan Pathan, who’d be seen playing a pivotal role.

Cobra is written and directed by Ajay Gnanamuthu. The film will be Chiyaan Vikram’s 58th film and it is a pan-Indian project catering to the Tamil, Hindi and Telugu audience. The film also stars KS Ravikumar, Mrinalini, Kanika, Padmapriya and Babu Antony. The film is expected to release in 2021.

(The above story first appeared on LatestLY on Jan 09, 2021 01:20 PM IST. For more news and updates on politics, world, sports, entertainment and lifestyle, log on to our website latestly.com).