Kaduva has been one of the most anticipated Malayalam movies. The Prithviraj Sukumaran starrer is written by Jinu V Abraham and directed by Shaji Kailas. 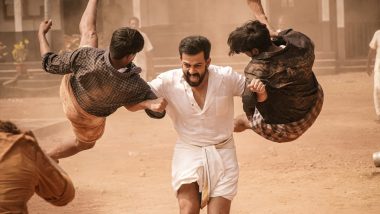 Kaduva was initially scheduled to be released on June 30. However, due to unforeseen circumstances, the makers had to postpone the theatrical release of the Malayalam film. This film would be special for many fans of Prithviraj Sukumaran and Vivek Oberoi as the two would be seen sharing screen space once again after the blockbuster Lucifer. One just cannot wait to watch the action-packed sequences between the two on the big screen as showcased in the film’s teaser. Kaduva: Dubbed Versions Of Prithviraj Sukumaran, Vivek Oberoi’s Malayalam Film To Release In Theatres On July 8.

Kaduva has been one of the most anticipated Malayalam movies. The film is written by Jinu V Abraham and directed by Shaji Kailas. Ahead of its theatrical release, let’s check out some the key information around it. Kaduva: Prithviraj Sukumaran Finds His Upcoming Film To Be a Refreshing Change.

Cast – Kaduva will feature Prithviraj Sukumaran in the titular role along with Vivek Oberoi and Samyuktha Menon. The film will also see Dileesh Pothan, Sri Sai, Siddique among others.

Plot – The film revolves around the life of a young high range planter Kaduvakunnel Kuruvachan and his rivalry with a high-ranking police official named Joseph Chandy Manjiledathu.

Watch The Teaser Of Kaduva Below:

Release Date – The film is all set to be released on July 7. The dubbed versions of Kaduva will hit the theatres on July 8.

Reviews – The reviews for Kaduva are not out yet. As soon as the review will be shared, LatestLY will update you all with the same.

(The above story first appeared on LatestLY on Jul 06, 2022 04:37 PM IST. For more news and updates on politics, world, sports, entertainment and lifestyle, log on to our website latestly.com).