Mahaan will be available to the viewers in Tamil, Malayalam, Kannada and Telugu on Amazon Prime Video on February 10. In Kannada, the film is titled Maha Purusha. 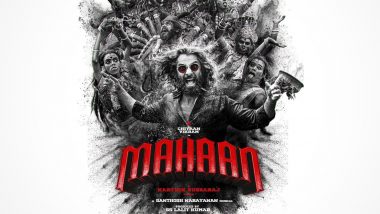 Mahaan, directed by Karthik Subbaraj, is one of the most-awaited releases. The film features Vikram and Dhruv Vikram in the lead with a stellar cast supporting the actors. There are just a few days left for the film to release on Amazon Prime Video and the team has been busy with promotional activities. The film has a gripping story of a man who goes through a personal crisis and what follows when he takes matters into his hand. Mahaan Trailer: Chiyaan Vikram and Son Dhruv Vikram’s Film by Karthik Subbaraj Shows Action-Packed Narrative With Unexpected Happenings.

Talking about the film, Karthik Subbaraj had earlier said, "Mahaan is a labour of love for me with a strong cast and crew supporting me by giving their very best. It is always a delight to work with Vikram, and Mahaan has been extra-special, as it is the 60th movie in his expansive and impressive career. The movie has also given me the opportunity to bring together and direct the dynamic father-son duo of Vikram and Dhruv in their first onscreen appearance together ever."

He added, "I am confident that fans and audiences are going to love seeing them light up the screens with their own unique brands of creativity moving in perfect harmony with the other."

The film chronicles the story of a simple man who goes through a personal crisis when his family walks out on him when one day he steps out of line from his straight-laced and principled life. He moves on without them to realize his ambitions, but even as he reaches the pinnacle of success, he misses the presence of his son and wants him back in his life. What follows is an action-packed narrative with unexpected events unfolding in his life that takes him through highs and lows, changing the course of his existence.

Watch The Trailer Of Mahaan Below:

Mahaan will be available to the viewers in Tamil, Malayalam, Kannada and Telugu on Amazon Prime Video on February 10. In Kannada, the film is titled Maha Purusha.

Sreeju Sudhakaran from Team Latestly watched the film. He says, " I had fun watching Dhruv act up against Vikram, but I had no fun with the storyline wrapped around these two. The first half that shows the corruption of Mahaan and his rise as the boss in Tamil Nadu's liquor business walks down some very familiar paths that keeps invoking a sense of deja vu.

Mahaan ditching his former ideals but not his nickname that gets stuck with him as he goes against the same ideals should have been an interesting idea. But the writing is merely packaging old wine in a new bottle. It doesn't help that Mahaan keeps reminding you of Mani Ratnam's Nayakan, only that here the protagonists enters the world of crime by his own choice, and not driven by circumstances.

One scene I liked in the first half is the action sequence that begins with Mahaan beating him his assailants in a long take, while he works around the after-effects of the intoxicant that he has been given. Scenes like these show flashes of the director's brilliance, but the rest of the movie isn't consistent with that."

(The above story first appeared on LatestLY on Feb 08, 2022 12:53 PM IST. For more news and updates on politics, world, sports, entertainment and lifestyle, log on to our website latestly.com).