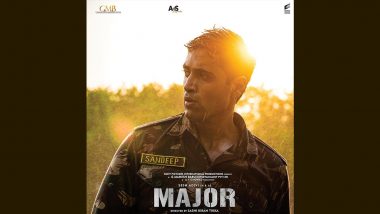 Major stars Adivi Sesh in the titular role. The film is directed by Sashi Kiran Tikka and produced by Sony Pictures International Productions, GMB Entertainment and A+S Movies. The upcoming flick, which is set to be released in a few days, traces the life story of Major Sandeep Unnikrishnan from his childhood to the 2008 Mumbai attacks. Adivi Sesh: Done With Making the Film But Not Major Sandeep Unnikrishnan's Spirit.

In an interview with PTI, Adivi Sesh was quoted as saying, “I am done making the film, I am not done with his spirit and I never will be. He has changed me as a person and made me so much less selfish.” Ahead of the film’s theatrical release, let’s take a look at some of its key details.

Plot – Major portrays the life of Major Sandeep Unnikrishnan. The biopic traces his journey from his childhood, marital life to commanding officer of the Operation Black Tornado. It focuses on how he saved the lives of numerous hostages in the Taj Mahal Palace Hotel during the 2008 Mumbai attacks.

Watch The Trailer Of Major Below:

Release Date – Adivi Sesh’s film Major will be released in Telugu and Hindi on June 3. The film has also been dubbed in Malayalam too.

Review – Major reviews are out. Click here to read what Sreeju Sudhakaran of LatestLY has to say on Adivi Sesh’s film.

(The above story first appeared on LatestLY on May 31, 2022 01:10 PM IST. For more news and updates on politics, world, sports, entertainment and lifestyle, log on to our website latestly.com).