Narappa which stars Venkatesh and Priyamani in lead roles is the latest film to be a victim of piracy. The Asuran remake was released on Amazon Prime Video on July 20. 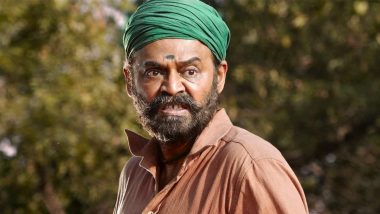 Venkatesh and Priyamani-starrer Narappa is finally out on Amazon Prime Video for its subscribed users. However, sadly the Srikanth Addala directorial is the latest one to be the victim of piracy. As the Asuran remake is leaked on the internet for free watching and download. This film is recent to be out on torrent sites and Telegram in HD prints. Search engine platforms are flooded with keywords such as Narappa movie download, Narappa movie download in 720p HD TamilRockers, Narappa 2021 movie in 1080 HD download. Narappa Movie Review: Venkatesh and Priyamani’s Faithful Asuran Remake Is a Victim of Comparison Trap (LatestLY Exclusive).

Narappa full movie in HD has been leaked on several torrent sites like Filmywap, Onlinemoviewatches, 123movies, 123movierulz, Filmyzilla and other pirated versions of Narappa movie in HD (300MB free download in 1080p, 720p, HD online) are available for the audience to watch.

However, this is not the first time, a movie has been leaked online for free watch, as this is a usual scenario all the time. In the past, severe actions are taken against these sites, but even after blocking them, they have bounced back to create a mess and promote piracy. Such kind of online crime should be stopped immediately as leaks are not at all acceptable.

Meanwhile, for the uninitiated, Narappa is the official Telugu remake of the Tamil film Asuran that starred Dhanush and Manju Warrier in the lead roles. It is based on the novel Vekkai by Poomani. Until now, the movie has garnered a mixed response from the audience and critics alike. Stay tuned!

(The above story first appeared on LatestLY on Jul 20, 2021 12:51 PM IST. For more news and updates on politics, world, sports, entertainment and lifestyle, log on to our website latestly.com).