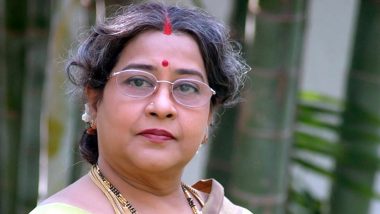 Veteran south actress Geetanjali Rama Krishna passed away due to cardiac arrest. She was taking treatment for the same at a private hospital near Film Nagar in Hyderabad and breathed her last in the early hours of Thursday. The actress has worked in several languages including Telugu, Tamil, Malayalam and Hindi. The news of her demise left the fans heartbroken and left condolence messages for her social media platforms. She was last seen in a Telugu film starring Tamannaah Bhatia's That is Mahalakshmi.

Geetanjali was born as Mani. She worked with Lakshmikant-Pyarelal production which was Parasmani. However, as the title of the film already had her name. Hence, the makers decided to change her name from Mani to Geetanjali. She later got married to director Rama Krishna after working with him in a few films. The filmmaker died in 2001. She is survived by her son Adith Srinivas.

Other noted work that she has left behind is her roles in films like Illalu, Sitarama Kalyanam with NTR, Adurti Subba Rao's Dr Chakravarthy, Murali Krishna, Abbayigaru Ammayigaru, Kaalam Marindi and Sambarala Rambabu. She was also a member of the committee that headed the Nandi Award ceremony.

(The above story first appeared on LatestLY on Oct 31, 2019 11:46 AM IST. For more news and updates on politics, world, sports, entertainment and lifestyle, log on to our website latestly.com).