Rana was supposed to be made with Amitabh Bachchan and Deepika Padukone in the lead alongside Rajinikanth. The team had started the shoot of the live-action historical magnum opus in the April of 2011 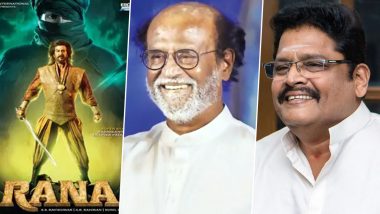 KS Ravi Kumar and Rajinikanth have made many films together that have done wonders at the box office. The two delivered blockbusters Narasimha and Muthu but there was one film that never saw the light of the day. Rajinikanth's ambitious project titled Rana has been in talks for almost 10 years now and KS Ravi Kumar has often talked about how he and the megastar want to revive the film. After several years of discussions, narrations and meetings, it looks like the film finally be made after all. Rajinikanth's Movie 'Kaala' Gets Release Date Reserved for Akshay Kumar-Thalaiva Starer 'Enthiran Sequel 2.0'.

KS Ravi Kumar who is currently busy his next film, an Android Kunjappan Tamil remake, revealed that Rajini has finally given a nod to the film. Speaking about the same as Android Kunjappan Tamil remake launch event in Chennai, the director said, “I am continuously in touch with Rajinikanth sir. Six months back, I narrated the final script of Rana to him, once again. He loved it completely and said that he would like to do it after he gains more physical strength. I’m looking forward to that day.” If this happens to pan ou well, then Annaatthe, that is rumoured to be Rajinikanth's final film, won't be the last time we see him on the screen.

Earlier in 2020, Kumar had shared an update about the film and said, "After Enthiran and Dasavatharam, Rana was supposed to be the next big step for both Rajini sir and me. It was historical and gave us a lot of scope to experiment. But we couldn’t make it. We then worked on Kochadaiiyaan, which was a prequel of sorts to Rana. It had a good story and led up to the story of Rana. Also, the film made sense then because it didn’t exert too much pressure on Rajini sir, who had just recovered. Even today, I revisit the script of Rana." Rajinikanth May Make Political Debut With Makkal Sevai Katchi Party, Say Sources.

Kochadaiiyaan was a 2014 Indian Tamil-language animated action film written by K. S. Ravikumar and directed by Rajinikanth's daughter Soundarya R. Ashwin. The film happened when Rana was shelved back in 2011. Rana was supposed to be made with Amitabh Bachchan and Deepika Padukone in the lead alongside Rajinikanth. The team had started the shoot of the live-action historical magnum opus in the April of 2011 but after the first day of the shoot, Rajinikanth’s health condition worsened and he was rushed to Singapore. The film never happened after the incident.

(The above story first appeared on LatestLY on Jan 28, 2021 05:10 PM IST. For more news and updates on politics, world, sports, entertainment and lifestyle, log on to our website latestly.com).