The theatrical trailer, however, fetched much hype for the movie already, as the audience awaits to see the movie at the theaters. S. Thaman has composed the music for 'Sarkaru Vaari Paata', as a couple of songs from the movie have become chartbusters already. 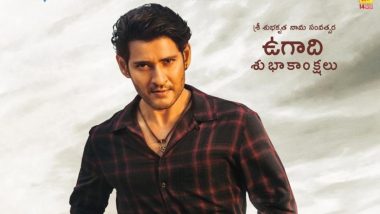 The stage is set for Mahesh Babu's upcoming commercial drama 'Sarkaru Vaari Paata' to be scrutinised by the Censor Board. The film directed by Parasuram Petla will be screened for censorship on Thursday, so as to make necessary arrangements for its big theatrical release on May 12. Sarkaru Vaari Paata Trailer: Mahesh Babu’s Swag Is Unmissable in This Action Comedy Co-Starring Keerthy Suresh (Watch Video).

With only a few days left prior to its release, the makers of 'Sarkaru Vaari Paata' are attempting to promote the movie as much as possible. In the coming days, the Mahesh Babu and Keerthy Suresh-starrer will be aggressively promoted, reports say. Mahesh will be back in India from his vacation in the coming days and begin promoting the film. Sarkaru Vaari Paata: Mahesh Babu and Keerthy Suresh’s Film To Be Released on 603 Screens in US.

(The above story first appeared on LatestLY on May 05, 2022 02:17 PM IST. For more news and updates on politics, world, sports, entertainment and lifestyle, log on to our website latestly.com).