From romantic, action to massy entertainer, let’s look at the top five films of birthday boy Sundeep Kishan that are a must-watch if you happen to be a fan of the star. Check it out. 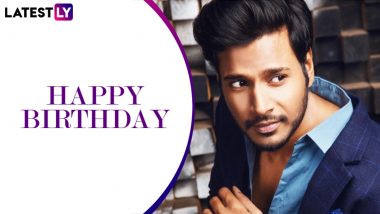 Sundeep Kishan is one of the most charming stars we have in the South industry. Since his debut in 2010, the actor has been entertaining fans with his acting skills. The best part about him is that he is a total package as apart from being a brilliant artist, he is also a fashion stunner. Having said that, the actor celebrates his birthday today (May 7), and what a better day to highlight his best works. From romantic, action to massy entertainer, let’s look at the top five films of Sundeep that is are must-watch if you happen to be a fan of the star. Sundeep Kishan Pledges To Help Children Who've Lost Their Parents Due to COVID-19 With Food and Education (View Post).

If you are looking to watch a crime drama that’s gripping and unpredictable, look no further. The movie will thrill you with its suspense. Sundeep plays the role of a tough yet good at heart guy who will make you fall in love with his character.

This romantic film might have not garnered wow reviews from the critics, but its twisted and typical love story makes it worth a watch. The story of the movie revolves around Nithya (Amyra Dastur) and Suraj (Sundeep Kishan) who are BFFs, however, there’s a spark between the two that’s beyond friendship. Gully Rowdy: Sundeep Kishan Is Up for a Quirky Turn in His Upcoming Action-Comedy.

With an IMDb rating of 7.2, well-written characters, and amazing performances, this Sundeep Kishan and Lavanya Tripathi-starrer mystery thriller is fab. Sundeep brings the right amount of bravery as well as vulnerability to his cop role to serve you a nail-biting experience. This one was dubbed in Telugu as Project Z.

Last but not the least, this is the film via which Sundeep made his debut into films. He essayed the role of Chinna and did a fab job, and that's how he got noticed and started getting offers from other filmmakers.

That’s it, guys! These are some of the audience's fave roles of the actor. Sundeep is a terrific performer and the above films definitely echo how he has tried different roles in his career so far that prove his versatility. Happy birthday, Sundeep Kishan. Stay tuned!

(The above story first appeared on LatestLY on May 07, 2021 08:40 AM IST. For more news and updates on politics, world, sports, entertainment and lifestyle, log on to our website latestly.com).