Big regional stars, like Suriya, Jyothika and Nani realised the potential of OTT, and stacked up their projects into the library, that too without compromising on the regional flair and flavours. IANS takes a look at a few of the big stars as well as projects that stepped out of regional domain. 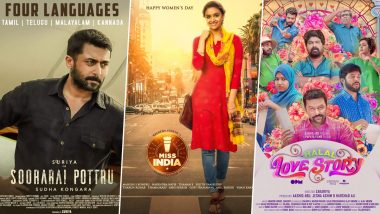 When the world was under lockdown due to the pandemic, a diverse world of regional language content opened up on the OTT platforms in India. With streaming services expanding their content library with varied stories, the year has turned out to be one when regional content came to all_india focus like never before. Telugu, Tamil, Kannada and Malayalam films particularly became household names for viewers of Indian content across the globe. From Anushka Shetty’s Nishabdam to Dulquer Salmaan’s Maniyarayile Ashokan, 7 South Films of 2020 That Released Directly on OTT and Left Us Annoyed! (LatestLY Exclusive)

In fact, big regional stars, like Suriya, Jyothika and Nani realised the potential of OTT, and stacked up their projects into the library, that too without compromising on the regional flair and flavours. IANS takes a look at a few of the big stars as well as projects that stepped out of regional domain and won fans all through the cyber world. Google Year In Search: Dil Bechara, Soorarai Pottru, Tanhaji – Here Are The Top 5 Movies Searched In 2020 In India!

The Tamil superstar was seen in "Soorarai Pottru", which takes inspiration from a true story. It is a fictionalised account of the life of retired Army Captain GR Gopinath, who founded the low cost airline, Air Deccan. The film also stars Mohan Babu, Paresh Rawal and Aparna Balamurali. "Soorarai Pottru" premiered on Amazon Prime Video.

Telugu superstar Nani's 25th film, V, ditched the traditional route for release, and opened digitally. It delves into the life of a police officer who falls in love with a crime writer. The Telugu action thriller released on Amazon Prime Video.

Amid lockdown due to the outbreak of coronavirus, the Jyothika-starrer Tamil film "Ponmagal Vandhal" launched on OTT in May. "It will be a boost to regional cinema and content-oriented films. There's a lot more we will get to see right now and we will get to know what is the flavour of every state. So, it is going to be a huge step and a big change in the way we see films," Jyothika had told IANS at the time. The legal drama released on Amazon Prime Video.

Vijay Sethupati and Aishwarya Rajesh's "Ka Pae Ranasingam" premiered on OTT platform ZeePlex. Vijay was seen essaying the titular character, while Aishwarya played his wife. It was about politics surrounding land and the plight of farmers.

"Miss India", released on Netflix, traces the journey of Samyukhta Manasa (Keerthy), a young passionate girl who, in an attempt to fulfill her grandfather's dream and her own childhood ambition, reinvents herself as she moves to the USA.

In "Penguin", she was seen as a pregnant mother who sets out on a dangerous and physically demanding journey to unravel a mystery from her past and save her loved ones. It was released on Amazon Prime Video.

The stars were seen in the Tamil devotional drama, Mookuthi Amman. It revolves around fake godmen, and how people fall for them. The film was released on Disney+ Hotstar VIP.

Anand Deverakonda's Telugu comedy drama "Middle Class Melodies" released on Amazon Prime Video. It brings forward a humorous tale depicting the lives of the middle class in the village where a young man dreams of owning a hotel in a town.

Venkat Prabhu will be making his foray into the digital medium with the horror show, starring Kajal Aggarwal. It will be released on Disney+ Hotstar VIP.

The four-part Tamil anthology is directed by four directors -- Sudha Kongara, Vignesh Shivan, Gautham Vasudev Menon and Vetri Maaran. It explores how love, pride and honour influence complex relationships. It is Netflix's first Tamil film, and will release on December 18.

The Malayalam film, starring Jayasurya and Aditi Rao Hydari, became the first Malayalam film to be released on the OTT platform. It narrates a story of a mute girl Sujata (Aditi) who is in love with her neighbour, a Sufi priest (Dev Mohan) but her father gets her married off to an NRI in Dubai. After 10 years, her husband (played by Jayasurya) decides to bring her back to the village. What follows, forms the crux of the musical love story. It was released on Amazon Prime Video.

Tamannaah will be seen in "November Story", which she said will come with a strong female-oriented narrative. Releasing on Disney+ Hotstar VIP.

The Malayalam satire is directed by Zakariya Mohammed and stars Indrajith Sukumaran, Joju George, Sharaf U Dheen, Grace Antony and Soubin Shahir in lead roles along with Parvathy Thiruvothu. It was released on Amazon Prime Video.

Nithya made her digital debut with "Breathe: Into The Shadows". "OTT platforms that are opening up now have started a healthy trend in terms of content and cinema. Sometimes, there is a certain stagnancy, everybody walks on the same path, and a lot of things become cliches. OTT is opening up new opportunities for everybody," she told IANS while opening up about her digital debut.

Filmmakers Mani Ratnam and Jayendra Panchapakesan have united to present the Tamil anthology film. "Navarasa" will be based on the nine rasas or emotions. In sync with the theme, nine short films will narrate stories across nine emotions -- anger, compassion, courage, disgust, fear, laughter, love, peace and wonder. The nine-film anthology will be released on Netflix.

The official remake of the Malayalam film "Charlie" stars Madhavan and Shraddha Srinath. It will be released on Amazon Prime Video on December 17.

Southern star Samantha Akkineni will be foraying into the digital medium with the second season of the much-awaited series, '"The Family Man". She says she has experimented with something new with her role, which will leave everyone surprised.

(The above story first appeared on LatestLY on Dec 11, 2020 02:37 PM IST. For more news and updates on politics, world, sports, entertainment and lifestyle, log on to our website latestly.com).