A video from the sets of Tughlaq Durbar has been shared by the Vijay Sethupathi’s fan pages in which the superstar is seen performing puja with the team. 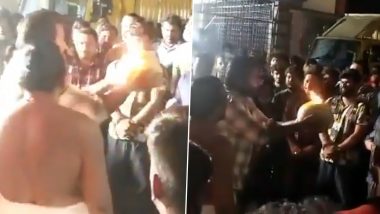 Vijayadashami that is also known as Dussehra is one of the popular Hindu festivals. Celebrated at the end of Navaratri every year, this time the festival was observed on October 25. This year the festival was a low-key affair owing to the coronavirus outbreak. However, that did not stop celebs from celebrating the occasion in their homes or on the sets of the film (if they are shooting). One of the stars who celebrated the auspicious occasion of Vijayadashami on the sets of the film was Vijay Sethupathi. Dussehra 2020: Nagarjuna Akkineni and Gopichand Wish Fans A Very Happy Dussehra! (View Posts).

Tughlaq Durbar is directed by Delhiprasad Deenadayalan. When the makers had released the first look poster of the upcoming flick, it showed two shades of Vijay Sethupathi and fans were mighty impressed with his look. Produced under the banner of Seven Screen Studio, this film will also feature Raashi Khanna as the lead actress. Stay tuned for further updates!

(The above story first appeared on LatestLY on Oct 26, 2020 09:39 AM IST. For more news and updates on politics, world, sports, entertainment and lifestyle, log on to our website latestly.com).