After the success of the first film, fans have been waiting to see the sequel and well, there's finally some good news. The release date of KGF Chapter 2 is now out. 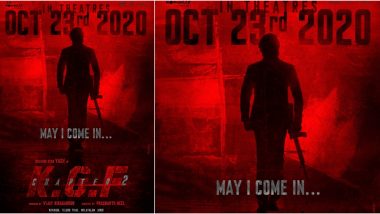 KGF Chapter 2 is one of the most awaited films starring Yash. Also joining the South sensation for the sequel are Bollywood stars Sanjay Dutt and Raveena Tandon. After the success of the first film, fans have been waiting to see the sequel and well, there's finally some good news. The release date of KGF Chapter 2 is now out. The film is all set to hit the screens on October 23, 2020. While Yash will be reprising his role from the original film, Sanjay Dutt plays Adheera in the film who is a dangerous man with a dangerous set-up. As for Raveena Tandon, the director of the film, Prashanth Neel had revealed a rather interesting thing. According to him, Tandon will play a lady who will issue death warrants in the film.  KGF: Chapter 2’s Official Teaser Will Not Be Out on Yash’s Birthday, Filmmaker Prashanth Neel Apologises to Fans (View Tweet).

The release date of the film has been announced along with a brand new poster which looks super intriguing. The new poster features a silhouette of actor Yash in a red and black background. The poster reads, "May I come in..". For the uninitiated, the first instalment of KGF garnered praises from audience and critics alike which also lead to the movie's box office success. The first instalment had released in theatres in Kannada and was later dubbed in Tamil, Telegu, Malayalam and Hindi.

Check Out the New Poster and Release Date Here:

KGF Chapter 2 also stars Srinidhi Shetty, Anant Nag and Malavika Avinash in key roles. It looks like the reason for announcing the release date of the film was special given that today marks one year of KGF Chapter 2 launch which was held in Bengaluru. KGF Chapter 2: Sanjay Dutt Begins Shooting in Hyderabad, Shaves His Head for Adheera's Character (See Pics).

Produced by Vijay Kiragandur under the banner of Homable Films, the film has been directed by Prashanth Neel and will be hitting the screens on October 23, 2020.

(The above story first appeared on LatestLY on Mar 13, 2020 06:45 PM IST. For more news and updates on politics, world, sports, entertainment and lifestyle, log on to our website latestly.com).