Aarya Season 2: From Cast To Streaming Date And Time, All You Need To Know About Sushmita Sen’s Series

Aarya, the crime-thriller drama, starring Sushmita Sen in the titular role is all set to premiere the second season. Ahead of the grand premiere, let’s take a look at the details of the cast, plot and streaming details of the series. 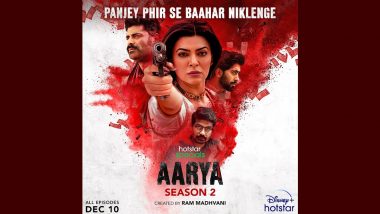 Aarya, the crime-thriller drama, starring Sushmita Sen in the titular role is all set to premiere the second season. The series that was hailed for the gripping narrative and impeccable performance of the star cast was nominated for International Emmy Awards for best Drama series. This series was not just Sushmita’s digital debut, but it also marked her comeback and what a brilliant performance she delivered in the first season. Well, now all eyes are on Aarya Season 2. Ahead of Aarya 2 Release, Sushmita Sen Gets Candid in a Rapid Fire Session With Disney+ Hotstar (Watch Video).

In the previous season we saw Aarya Sareen (Sushmita Sen) as a caring mother and wife who is unaware of her husband Tej Sareen’s (Chandrachur Singh) illegal business activities. But things come into limelight after her husband, a pharma baron, gets mysteriously killed and the life in the Sareen household changes. The series then showcases Aarya’s journey towards becoming the mafia queen who is in seek of revenge from those who killed her husband. Amidst this, she was also seen balancing her family life. Ahead of the grand premiere of Aarya Season 2, let’s take a look at the details of the cast, plot, trailer and streaming details. Aarya 2: Sushmita Sen Shares a New Poster From Her Upcoming Disney+ Hotstar Series.

Plot – The second season will showcase Aarya combatting the dark world of crime and her loved ones becoming the target. It will show that she deals against all odds to save her children and all loved ones in this compelling series. Like the makers say, ‘This season, her weakness is her greatest strength’.

Trailer – Watch the glimpse of Aarya’s journey and her battle against the enemies who ruined her peaceful family life.

Release Date – There’s just one day left for the much-awaited series to be premiered. Sushmita Sen starrer Aarya Season 2 is all set to be premiered on December 10.

Where To Watch – All the episodes of Aarya Season 2 created by Ram Madhavni will be streamed on Disney+ Hotstar. This series is an official adaption of the hit Dutch series Penoza.

(The above story first appeared on LatestLY on Dec 09, 2021 04:03 PM IST. For more news and updates on politics, world, sports, entertainment and lifestyle, log on to our website latestly.com).