Bandish Bandits: All You Need to Know About Ritwik Bhowmik and Shreya Chaudhry, the Lead Stars Of Amazon's Musical Series

While the audiences are falling in love with the characters of Ritwik and Shreya, not many know about these two actors' real-life deets. In the series, we meet Ritwik as Radhe, a classical singer and Shreya as pop sensation Tamanna. 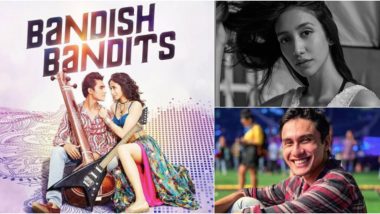 We bet in the time of coronavirus, one of the biggest respite has been streaming platforms who have been dedicatedly bringing us fresh content to keep us entertained. One of the latest Amazon Prime offerings has been Bandish Bandits, a musical series directed by Anand Tiwari. The show's music has been composed by Shankar, Ehsaan and Loy and stars actors Ritwik Bhowmik, Shreya Chaudhry, Naseeruddin Shah, Atul Kulkarni, Kunal Roy Kapur, Sheeba Chaddha and Rajesh Tailang in lead roles. The series is now streaming on Amazon Prime and reviews have been flowing in with praises for its lead cast and their performances. Bandish Bandits Season 1 Review: Ritwik Bhowmik, Shreya Chaudhry’s Musical Saga Gets Its Tune Right With Shankar-Ehsaan-Loy’s Brilliant Soundtrack and Amazing Supporting Cast.

While the audiences are falling in love with the characters of Ritwik and Shreya, not many know about these two actors' real-life deets. In the series, we meet Ritwik as Radhe, a classical singer and Tamanna (Shreya Chaudhry), as a pop sensation from Mumbai. While many are seeing Ritwik and Tamanna for the first time in lead roles, the duo have worked in other projects before. Here's all you need to know about the lead stars of Bandish Bandits.

Ritwik Bhowmik Has Been a Stage Actor

While Ritwik may be a new face for the screens, he is a seasoned actor when it comes to the theatre. Bhowmik has worked in over 17 stage plays. He has also acted in six short films and also a host of TV commercials.

Ritwik Was a Part of TVF's Office Vs Office Series

In TVF-Screen Patti's comedy web series, Office Vs Office, Ritwik essayed the role of Baldev. The actor was seen in a small role in the series which starred Cyrus Sahukar, Palomi Ghosh, Naveen Kaushik in lead roles.

Ritwik Is a Trained Dancer-Choreographer

Ritwik graduated from Shiamak Davar Institute of Performing Arts, Bangalore. He also worked as a professional dancer, choreographer and instructor for a long time at Shiamak Davar International India.

Shreya Chaudhary became a known face after she appeared in several popular commercials. She also worked with director Abhishek Kapoor for one of the commericials and ever since there was no looking back. Chaudhry graduated in adversiting but has found acting to be her first love.

Before Bandish Bandits, Shreya has worked alongside Manisha Koirala in Dear Maya, where she essayed the role of Ira. Chaudhry has also worked with director Imtiaz Ali on the short film, The Other Way.

Shreya Has Worked With Ranbir Kapoor!

Well,not in a film but Shreya did feature in Ranbir Kapoor and Paresh Rawal starrer commercial for popular sft drink brand. The actress excitedly also wrote about the same on her Instagram saying, "Got to work with two of my favourite actors." Bandish Bandits: Shankar-Ehsaan-Loy Set for Their Digital Debut With Amazon Prime’s Musical Series.

Well, if these interesting things about Ritwik and Shreya aren't enough to make you check out their latest work, we don't know what will. In case you have already watched the musical series and are in love with Radhe and Tamanna, do tell us your favourite moments of the duo from the show in comments below.

(The above story first appeared on LatestLY on Aug 04, 2020 02:18 PM IST. For more news and updates on politics, world, sports, entertainment and lifestyle, log on to our website latestly.com).