Salman Khan has returned as the host for the 13th season of Bigg Boss. He was introducing the new lineup of contestants on the show. While he was introducing Saki Saki girl Koena Mitra, he accidentally took Katrina Kaif's name. 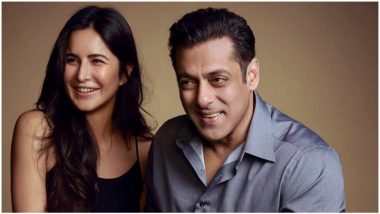 The first episode of Bigg Boss 13 has premiered. Salman Khan introduced the 14 contestants that will be locked inside the house. One of the contestants is Saki Saki girl Koena Mitra. She is looking so different than what she looked in the movie, Musafir. But more importantly, while introducing the actress Salman Khan instead took Katrina Kaif's name. So, what happened when he was calling Koena on stage, Salman said, "Aur ye hain, Kat..." He realises his mistake before he finishes the sentence. He corrects himself, "Koena Mitra," and follows it up with a chuckle. Shefali Bagga in Bigg Boss 13: Did You Know She Had Once Reported About Salman Khan Crying During BlackBuck Poaching Case Hearing? (Watch Video).

Salman, then adds, "Katrina nikal gaya galti se muh se," LOL! It was quite a funny moment to watch on the show. We wonder what must have been Katrina Kaif's reaction to this goof-up by Salman.

Salman and Katrina were dating each other for a long time before parting ways in 2009. Talking about her equation with Salman, Katrina said in an interview with Filmfare in 2019, "Honestly, I don't cross the line with him. People outside may not understand this. Ours is a healthy equation. There's no unnecessary baggage. Ours is a respectful friendship." Bigg Boss 13: Salman Khan’s Chic Look for the Grand Premiere Night Is Bang On!

Salman and Katrina have worked together in multiple films, starting with Maine Pyaar Kyon Kiya. They have also worked together in a blockbuster like Tiger Zinda Hai, which is one of India's highest-earning movies. They were last seen together in the superhit film, Bharat. Katrina stepped in as the heroine for the film, after Priyanka Chopra backed out last minute.

(The above story first appeared on LatestLY on Sep 29, 2019 11:33 PM IST. For more news and updates on politics, world, sports, entertainment and lifestyle, log on to our website latestly.com).