Mastermind Vikas Gupta took to Twitter and rubbished the rumours of Devoleena Bhattacharjee or Rashami Desai entering the show as his proxy. That's not it, as he also wished luck to Devoleena for playing on someone else's behalf. Check it out. 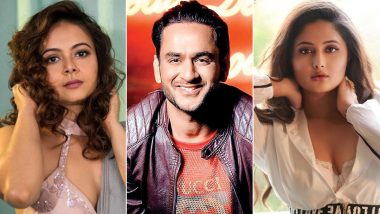 It was recently speculated that Devoleena Bhattacharjee or Rashami Desai is soon to enter the Bigg Boss 14 house as Vikas Gupta's proxy. For the unaware, the mastermind had made an exit from the reality show owing to his ill health. After which, reports started doing rounds that Gupta's close buddies Devo/Rashami (any among the two) will play on his behalf. However, Vikas took to his Twitter and dismissed the above rumours. He mentioned none of the leading actresses was approached to be his proxy on Salman Khan's controversial show. Bigg Boss 14: Devoleena Bhattacharjee To Enter Salman Khan’s Reality Show As Vikas Gupta’s Proxy – Reports.

Along with setting the record straight, Vikas also wished luck to Devoleena for entering the show and playing for someone else. FYI, there has been strong gossip that Devo will make her presence felt as Eijaz Khan's replacement on BB 14, as the actor needs to leave the show due to prior commitments. Well, so did Gupta confirm this update via his tweet? Whatsoever would be the case, it will be interesting to see Bhattacharjee back. Bigg Boss 14: Vikas Gupta Makes An Exit From Salman Khan's Reality Show Due to Health Issues - Reports.

Neither @TheRashamiDesai nor @Devoleena_23 were approached to be proxy for #VikasGupta All the best #DevoleenaBhattacharjee who is going to play for another if reports r true & #RashamiDesai actually flew from her shoot the same day to fill the family space for VG ❤️ #BiggBoss14 pic.twitter.com/siG2Nq9FcA

Devoleena's Was Quick To Reply:

Vikas has been going through a tough time after he came out as a bisexual man. Also, if you recollect, it was a week ago, even Rashami Desai had entered the BB 14 house as Vikas Gupta's family. She was seen motivating him and had also blasted Aly Goni and Jasmin Bhasin of mentally bullying Vikas. Stay tuned!

(The above story first appeared on LatestLY on Jan 16, 2021 08:12 PM IST. For more news and updates on politics, world, sports, entertainment and lifestyle, log on to our website latestly.com).