Cargo: Vikrant Massey and Shweta Tripathi's Science Fiction Film to Release on Netflix On September 9; Check Out the Announcement With a Mirzapur 2 Twist! (View Post) 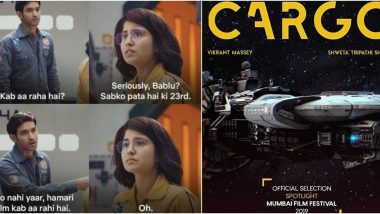 Vikrant Massey and Shweta Tripathi's science fiction film Cargo has now been confirmed to get a digital release. It was earlier reported that the film will be heading for an OTT release but it wasn't confirmed when and where. Actor Vikrant Massey recently took to Instagram to annouce the film's release date and also confirmed that it will be releasing on Netflix on September 9. The actor announced the same in a meme format as he shared a picture of his and Shweta's scenes from the film though it had a Mirzapur twist. Mirzapur 2 Release Date Is Out! Ali Fazal-Pankaj Tripathi's Amazon Prime Series To Stream From 23 October 2020 (Watch Video).

Both Vikrant and Shweta Tripathi have starred together in another popular OTT project, which is Amazon Prime series, Mirzapur. The series' second season is all set to release soon although Vikrant's character won't be returning for the same.  To announce the release date of Cargo, Vikrant shared a picture that show's Shweta referring to him as 'Bablu', his Mirzapur character.  ICYMI, the teaser of Mirzapur 2 was released recently and it has been announced that the series will be reeased on October 23.

As for Cargo, the film's teaser was released in October 2019 when the film was selected for the Spotlight section of Mumbai Film Festival. The science-fiction film revolves around the journey of Shweta astronaut on a spaceship who meets another rather reserved astronaut during her space expedition. The film though revolves around mysterious cargoes that land on their spaceship and also seems to have supernatural twist. Cargo Teaser: Vikrant Massey and Shweta Tripathi's Science Fiction Drama is Sure to Leave You Intrigued (Watch Video).

Cargo was garenered with positive reviews after its MAMI 2019 screening and it looks like the OTT audience is going to get impressed by the same. The science fiction film is all set to release on September 9 on Netflix India.

(The above story first appeared on LatestLY on Aug 25, 2020 04:40 PM IST. For more news and updates on politics, world, sports, entertainment and lifestyle, log on to our website latestly.com).