Earlier, the streaming giant had announced its collaboration with directors such as Kashyap and others for original films and this is among the same. 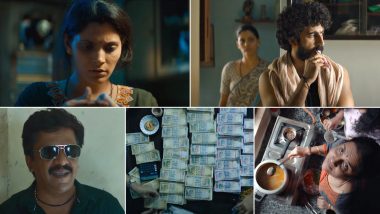 After we saw the first look poster of Anurag Kashyap's upcoming Netflix film, Choked, we were more than excited to find out what this film is all about. Starring Saiyami Kher, Roshan Mathew, Amruta Subhash in lead roles, the trailer of the Netflix original is now here. Revolving around a middle-class working woman who works as a cashier at the bank, the film is high on suspense and takes some unexpected turns. Earlier, the streaming giant had announced its collaboration with directors such as Kashyap and others for original films and this is among the same. Netflix Announces 4 Indian Films For 2020, Courtesy Anurag Kashyap, Karan Johar, Vikramaditya Motwane and Dibakar Banerjee (Read Tweet).

Anurag Kashyap promises to build up this story of a regular bank cashier to something interesting as he shows her landing up on an unexpected source of cash from her choked basin. As Saiyami's character starts collecting wads of cash, she starts to spend her newfound fortunes without any worries until Prime Minister Narendra Modi turns her world upside down with the demonetisation announcement.

Kashyap's Netflix collaboration isn't new considering he has previously worked on the original series Sacred Games and later on anthology films of Lust Stories and Ghost Stories. With Choked, it looks like Kashyap is back to serve us an intriguing story of ambition mixed with a bit of greed and politics. The film is slated for a June 5 release on Netflix.

(The above story first appeared on LatestLY on May 21, 2020 12:48 PM IST. For more news and updates on politics, world, sports, entertainment and lifestyle, log on to our website latestly.com).