Hawkeye Finale Review: A Frustrating Episode That Makes You Question the Purpose of Jeremy Renner’s Disney+ Series or Why Kingpin Returned! (LatestLY Exclusive) 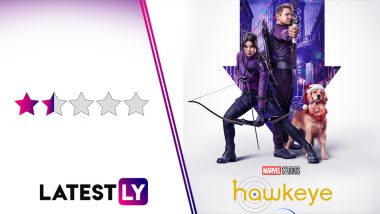 Hawkeye Finale Review: Dear Kevin Feige, a request for you from someone whom your admirable vision converted into a diehard superhero movie fan. Please, please tighten your grip on your Marvel Cinematic Universe. After the high of Avengers: Endgame and even Spider-Man: Far From Home, your Phase 4 is treading on very shaky grounds. Yes, I enjoyed Shang-Chi, and am in love with Spider-Man: No Way Home (for which Sony is taking most of the credit). But Eternals and Black Widow have been underwhelming and your Disney+ series are all sorts of mixed bag, with Hawkeye being the most disappointing of the lot. Hawkeye Episode 5 Review: Florence Pugh Proves To Be Scene-Stealer Again; Disney+ Series Heralds Return of Fan-Favourite Marvel Villain… Well, Almost!

Seriously, Mr Feige, both the Avenger and the fantastic Jeremy Renner deserve better than what I presume to be the sendoff you have arranged for the character. Which is strangely funny, since I see your name as the producer for the series. Clint Barton has always been the most underrated of the cinematic Avengers, that translates to being the most uninteresting of the lot. It is only Renner's performance that makes us root for him, and the reason why the character seemed slightly interesting in Avengers: Age of Ultron and Avengers: Endgame, especially the whole Ronin thing in the latter.

I had hoped that Hawkeye the series would do justice to the character that your entire 25 odd-movie arc struggled to do. But after seeing the finale, I wish you would have had let Barton enjoy his life in obscure retirement in his farm with his family on Christmas. He doesn't deserve this, man! Caution - Some SPOILERS Ahead!

Even though I am not a huge fan of Marvel's Disney+ series, I have enjoyed them while they lasted. WandaVision had a strong going, till the fan theories went way out of control and the limp finale does little to save it. The Falcon and The Winter Soldier was fun, but nothing groundbreaking and is now deemed forgettable. What If? was more of a mixed bag, there were some episodes I truly enjoyed, while some were ho-hum. Loki was super-fun, till you made Tom Hiddleston a supporting player in his own show and turned the last episode (so this is a persistent problem) into the third act of The Matrix Reloaded.

But these shows did enthrall me for most of the parts. Hawkeye never got to me, despite its immense potential. There was so much to like here. Hawkeye as a series was very grounded, when Phase 4 dive headlong into magical possibilities. There are some very likeable actors in the cast. Hailee Steinfeld made for an exciting Kate Bishop, till she turned into an annoying teenage trope. The Christmas spirit lent a festive hue to the series. The third episode that introduced Maya Lopez (Alaqua Cox) aka Echo into MCU was easily the best of the lot, and raised our expectations so high. You do deserve some points for that casting! And yes, Hawkeye was to give Vincent D'Onofrio's Wilson Fisk aka Kingpin - one of the best onscreen Marvel villains - a grand official entry into MCU, with him making an appearance in the final episode. Hawkeye Episode 3 Review: Alaqua Cox as Maya Lopez aka Echo Leaves a Mark in Jeremy Renner, Hailee Steinfeld's Marvel Series.

Oh, how the Christmas cookie crumbled so badly here! The one hour long finale is such a travesty , screenplay-wise, that it left me super-annoyed and frustrated in the end. Yes, the episode was action-packed and we get to see some fun stuff from Hawkeye's almost magical arrows, including one that has Ant-Man powers. Yes, Kingpin has more than a cameo in the episode, and we get to see his terrifying strength here. Yes, there is a very snazzy treatment to the proceedings that works well with the X'Mas spirit of the show.

But Hawkeye makes so much of a mess with its narrative and character developments, that not even Damage Control can do anything about it. The whole Yelena (Florence Pugh) wanting to seek vengeance on Barton skates on such thin predictable ice that I cringed at the show for wasting the talents of Pugh (also, what's with her makeup?). Kate and Yelena's camaraderie that was a highlight in the previous episode, is cloying as F here, even though we get to see them spar with each other, physically and verbally. The whole track about Kate's mother (Vera Farmiga in the series' another wasted casting opportunity) is a very predictable letdown, that offers no single surprise that you couldn't have guessed in the first episode.

However, Hawkeye's biggest crime was in how it dealt with Kingpin's character. After a very average re-intro for what is a fan-favourite character, the episode treats Kingpin to a disposable villain-of-the-week route, neutered by the PG-13 rating of the Disney series. While I don't want to share details of how the episode uses Kingpin, I can guarantee that it will leave you tearing your hair in annoyance and wishing Netflix insisted in making Daredevil season 4. Just let me leave you with a friendly caution - do not go in expecting a Hawkeye vs Kingpin fight. Also I am hoping that I haven't seen the end of the character in the grand vision of this Marvel universe.

PS: Even the sole end-credit scene offers nothing less than disappointment, if you are expecting something exciting for the future of Hawkeye or Phase 4 in general.

With a trule weak finale, Hawkeye ends up at the bottom of the heap when it comes to MCU offerings both on big and small screen. Which is cruel, since all the actors and their characters deserve far better than what they get to do here. Or for the matter, even their fans! All six episodes of Hawkeye are streaming on Disney+ Hotstar.

(The above story first appeared on LatestLY on Dec 22, 2021 04:33 PM IST. For more news and updates on politics, world, sports, entertainment and lifestyle, log on to our website latestly.com).