Inside Edge Season 3: Siddhant Chaturvedi and Angad Bedi Are Not Part of Richa Chadha’s Amazon Prime Video Series – Here’s Why!

If you are expecting Angad Bedi's Arvind Vashishth and Siddhant Chaturvedi's Prashant Kanaujia to be a part of Inside Edge season 3, then you are up for a disappointment. Here's why read the full story here. 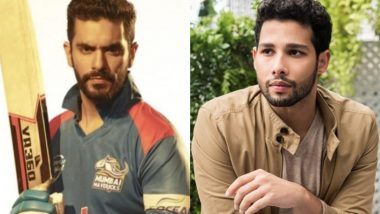 On June 21, the makers of Inside Edge dropped a big announcement revealing that season 3 of the sports drama will be coming soon on Amazon Prime Video. With this news, fans of the show are already elated as India's Emmy nominated series will be back with a bang. However, if you happen to admire Angad Bedi's Arvind Vashishth and Siddhant Chaturvedi's Prashant Kanaujia from the series then you are up for a disappointment as these two characters will not be part of the upcoming season. Yes, you read that right!  Inside Edge 3: Makers Announce the Latest Season of the Show Coming Soon on Amazon Prime Video (View Poster).

In an interview with LetsOTT, Angad himself spilled the beans that Arvind is not coming back in season 3. The actor mentioned how the work on his character was done when he was shooting for Gunjan Saxena: The Kargil Girl. Bedi said, "I also felt, and perhaps so did the writers, that Arvind doesn’t have a lot to add to the story this time around. No character is bigger than the story… than the show." However, the actor also gave hope that there is a possibility that he might return in season 4.

Now, talking about Siddhant's exit from the series, in an earlier interview with Bollywood Life, he had revealed how he is concentrating on films. "I'm not a part of the third one. Because now I’m focusing on films. And I don't see that (the character) growing anywhere, because the guy is mentally too blocked to play anymore," he had said. Siddhant played a rookie fast bowler in the series. Inside Edge Season 3: Actress Khatija Iqbal Bags a Cameo Role in Upcoming Amazon Prime Show.

With two main characters of the web series out of the plot, it will be interesting to see how the premise will be built in Inside Edge 3. The show stars Vivek Oberoi as Vikrant Dhawan, Aamir Bashir as Yashvardhan Patil, Richa Chadha as Zarina Malik, Tanuj Virwani as Vayu Raghavan, and many more. The storyline of the show is based on a fictional T20 cricket team from Mumbai, whose owners are into spot-fixing. Stay tuned!

(The above story first appeared on LatestLY on Jun 21, 2021 04:43 PM IST. For more news and updates on politics, world, sports, entertainment and lifestyle, log on to our website latestly.com).