In the promo shared by Colors TV, we see Abhinav voting Rakhi and asking her to stop. When Rakhi denies to do it, he starts crying and says it is his fault that he allowed Rakhi to be so comfortable around him. 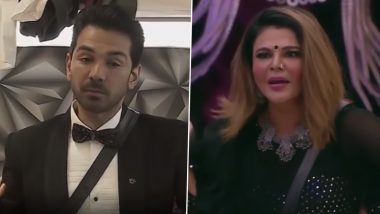 Bigg Boss 14 is all about controversies and entertainment and when there are contestants like Rakhi Sawant in the house, then there is ought to be some drama. Rakhi has been the highlight throughout this week for her desperate declaration of love towards Abhinav Shukla. The actress has been doing all sorts of things to annoy Abhinav and his wife Rubina. Rakhi started this as a revenge on the couple for ignoring her and is calling it entertainment while Abhinav and Rubina are done with her cheap antics and have been blasting on her for doing these cheap tricks. Bigg Boss 14: Rakhi Sawant Tears Abhinav Shukla’s Underwear as an Act of Revenge on Him for Ignoring Her.

Today, during the Weekend Ka Vaar episode, all the contestants would be asked to take a name of the most troublesome contestant. In the promo shared by Colors TV, we see Abhinav voting Rakhi and asking her to stop. When Rakhi denies to do it, he starts crying and says it is his fault that he allowed Rakhi to be so comfortable around him. The promo went viral on social media and Abhinav's fans started trending #ViewersWithAbhinav on Twitter. They slammed Rakhi for her cheap tactics and said that she is wrong.

A user wrote, "Too much will never ever follow bigg boss anymore !!it hurts when you see such derogatory to nice people beyond limit !!#Abhinav Shukla genuinely respect all and Endemol doing such target uff !! now its total harassment! He never ever crossed any single line still !VIEWERS WITH ABHINAV" Many said that Abhinav is one of the most behaved gentlemen in the Bigg Boss house and he doesn't deserve this kind of treatment. Others went on to call Rakhi 'cheap' and asked if the same thing would have been tolerated if a guy would have pulled the string of a girl's shorts.

They were put off by rakhi after press episode when they came to know of her bad mouthing. Earlier they had taken in good spirit only. What if any boy had pulled any girls string.

Too much will never ever follow bigboss anymore !!it hurts when you see such derogatory to nice people beyond limit !!#AbhinavShukla genuinely respect all and endemol doing such target uff !!now its total harasmnt! He never ever xrossed single line still !VIEWERS WITH ABHINAV

In another promo, we see Salman Khan lashing out on Abhinav for talking so rudely with Rakhi. He goes on to say that whatever Rakhi is doing is sheer entertainment and his reactions towards the same are not right. Salman even said that only Abhinav is benefitting from this. Abhinav tried to defend himself but Salman asked him to let him speak and made him understand that if Rakhi would do anything wrong, the makers of the show will warn her themselves. Bigg Boss 14: Rakhi Sawant Pulls the String of Abhinav Shukla’s Shorts, Rubina Dilaik Blasts the Former for Crossing Her Limits.

The whole situation occurred after Rakhi started annoying Abhinav by doing random things. She wrote "I love Abhinan" all over her body and roam around in the house like that. She was advised by Vikas Gupta, Arshi Khan, Aly Goni to not do it but she was very adamant about making the couple regret ignoring her. She even tore Abhinav's underwear and pulled the strings of his shorts during this week.

(The above story first appeared on LatestLY on Jan 30, 2021 04:51 PM IST. For more news and updates on politics, world, sports, entertainment and lifestyle, log on to our website latestly.com).