Bigg Boss 14: Rakhi Sawant Tears Abhinav Shukla’s Underwear as an Act of Revenge on Him for Ignoring Her

This step comes after Rakhi noticed how Abhinav and Rubina have been ignoring the actress ever since the last Weekend Ka Vaar episode. They got to know that Rakhi has been talking ill about them behind their back. 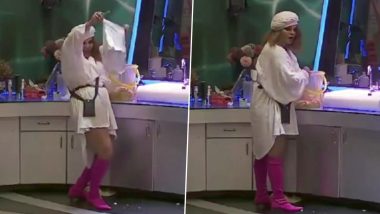 Bigg Boss 14 has always seen its high and lows. While some days go peacefully in the house, some days you find contestants doing unimaginable things in the house. This season we have Rakhi Sawant to fill up that void. Ever since her entry in the show, she has been making sure keeps the entertainment quotient high with her crazy antics. One day she turns into a witch and another day she fights with contestants like it is the end of the world. Apart from this, her growing fondness for Abhinav Shukla has also become a topic of discussion in the town. Bigg Boss 14: Rakhi Sawant Writes ‘I Love You Abhinav’ All Over Her Body; Refers to Herself As the Actor’s Girlfriend.

Rakhi is smitten by the handsome actor and is doing everything possible to woo the actor who is already married to Rubina Dalaik. Earlier during an episode, she wrote "I love Abhinav' all over her body and tried to intimidate him and now she has torn his underwear to teach him a lesson. In a video that is going viral on social media, Rahki is seen picking up his under garment and tearing it up with the help of a scissor. She is seen saying, "Now try and wear this underwear. When I asked you to give it to me for a wash, then you did not. Now look what I have done to your brand new underwear."

Rakhi then goes into the storage room to hide the underwear and tears it even more before keeping it. She is seen mocking Ahinav and laughing like crazy while destroying his clothes. She looks quite happy about it and we wonder how Abhinav will react to this once he finds out. Bigg Boss 14: Rubina Dilaik and Rakhi Sawant Talk About Watching BB14 Once They Are Out and Regretting Their Actions.

This step comes after Rakhi noticed how Abhinav and Rubina have been ignoring the actress ever since the last Weekend Ka Vaar episode. They got to know that Rakhi has been talking ill about them behind their back. Now, in order to get a reaction from Abhinav, Rakhi decided to destroy his clothes and really cant wait to see how this ends.

Earlier Rakhi had created a drama when she was removed from the dishwashing duty with Abhinav. She said that it all happened because Rubina did not want to see the two together. Rakhi was warned by Aly Goni, Vikas Gupta, Arshi Khan about how she is ruining her relationship with the couple but she seemed to not care about it.

(The above story first appeared on LatestLY on Jan 27, 2021 03:56 PM IST. For more news and updates on politics, world, sports, entertainment and lifestyle, log on to our website latestly.com).