CBSE Re-examination Dates: Board To Conduct Re-test of Class 12 Economics Paper on 25th April, Date For 10th Mathematics Paper Will be Released Later

The Board has taken the decision following the reports of question paper leak. With the re-examination dates being released by CBSE, students are bound to study again. The Police department as of now has not arrested anyone. 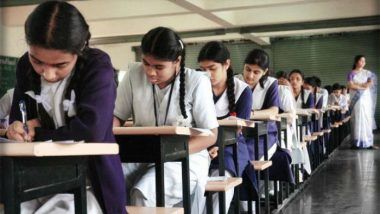 The Central Board of Secondary Education (CBSE) has released the re-examination dates on their official website, cbse.nic.in. As per the notification, CBSE Class 12 Economics re-test will be on April 25, 2018  at various examination centres across the nation. While the dates of Class 10 Math paper will be released later. Students can visit the website of CBSE to know the details. The Board has taken the decision following the reports of question paper leak.

Regarding Class 10th re-examination, as leak was restricted to Delhi and Haryana, if it at all a re-exam will happen, it will happen only in Delhi & Haryana and a decision will be taken on this in next 15 days. And it will be conducted in July; added Secretary Education.

Meanwhile, the Delhi Police crime branch has so far questioned over 30 people including the owner of Rajinder Nagar-based coaching institute, few students and tutors in connection with the CBSE paper leak. As per media reports, over a dozen of mobile phones belong to them has also been seized. The Human Resource Development (HRD) Minister Prakash Javadekar in a press release on March 29 assured the CBSE students and their concerned parents that the culprits would soon be behind the bar. On the other hand, affected students on their part protested outside the CBSE office on March 30, saying, “Students are suffering due to CBSE’s mistakes.” They have also showered their anger and disappointment against the decision through social media.

For many class X students, the Math paper which was conducted on March 28 was the last one as the remaining subjects range from Sanskrit to Paintings. Hours before the exam, the question papers were leaked on social media. Again class XII Economics paper which was held on March 26, the questions were available on Whats App. While students scrambled for the latest CBSE news, the question paper leak has also became a political issue, with the Congress targeting Prime Minister Narendra Modi.

With the re-examination dates being released by CBSE, students are bound to study again.  CBSE class 10 students will have to wait for some time as the dates shall be released by the officials soon. The Police department as of now has not arrested anyone. This will likely be the first nationwide retest in the recent memory. The utter negligence of the board has led the decision keeping the future of over 28 Lakh students at stake. The entrance tests led by CBSE could also be affected with the board conducting the re-examination.

(The above story first appeared on LatestLY on Mar 30, 2018 06:21 PM IST. For more news and updates on politics, world, sports, entertainment and lifestyle, log on to our website latestly.com).