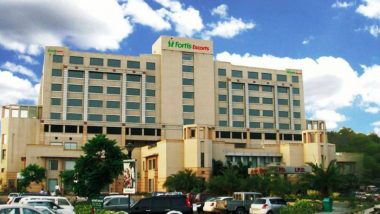 New Delhi, March 28: Fortis Healthcare Ltd (FHL) today said the merger of its hospitals business into Manipal Hospitals Enterprises is expected to be completed in 10-12 months. The company's board had yesterday approved demerger of its hospitals business, which will be acquired by Manipal Hospitals and TPG Capital, along with the sale of 20 percent stake in diagnostics chain SRL Ltd.

"The merger will take time. The merging of Fortis into Manipal will take between 10 to 12 months," FHL CEO Bhavdeep Singh said in a conference call today. The company had said yesterday that the proposed transaction was subject to shareholders' approval, creditors' approval, applicable regulatory approvals (including Competition Commission of India, SEBI, stock exchanges and National Company Law Tribunal (NCLT) and other customary conditions precedent. When asked about the investigations by Serious Fraud Investigation Office (SFIO) in the company over alleged financial irregularities in the company involving its promoters, Singh brothers, Bhavdeep Singh said: "We are cooperating with the ongoing SFIO investigations."

The sale of the hospital business of Fortis to Manipal-TPG combine comes at a time when the Singh brothers -- Malvinder and Shivinder -- are facing intense pressure over alleged financial irregularities at Fortis and Religare, which the SFIO is investigating. Both Malvinder Singh and Shivinder Singh had quit from the boards of Fortis and Religare last month. The Delhi High Court had on January 31 upheld an international arbitral award of Rs 3,500 crore passed in favour of Japanese pharma major Daiichi Sankyo, which had alleged that the former promoters of erstwhile Ranbaxy Laboratories had concealed information about proceedings against them by the US Food and Drug Administration.

Moreover, on February 15, the Supreme Court lifted its stay on sale of shares of Fortis Healthcare Ltd. pledged with banks by the Singh brothers before August 31, allowing financial institutions, including Axis Bank and Yes Bank, to sell the pledged shares. Shares of Fortis Healthcare tanked 9.58 percent in the afternoon trade at Rs 128.80 apiece on BSE reacting to the news of the sale of its hospitals business. As part of the transaction, Fortis board had also approved a sale of 20 percent stake in diagnostics chain SRL Ltd.

Manipal Hospitals, part of Manipal Education and Medical Group (MEMG), is owned by Dr. Ranjan Pai and has been backed by TPG, a leading global alternative asset firm and experienced healthcare investor since 2015. As part of the proposed transaction, Ranjan Pai and TPG will invest Rs 3,900 crore into the merged entity. The combined entity will have pan India presence with 45 hospitals and a bed capacity of over 7,658 beds. It will have over 4,200 doctors, more than 9,300 nurses and 11,400-plus other employees across India.